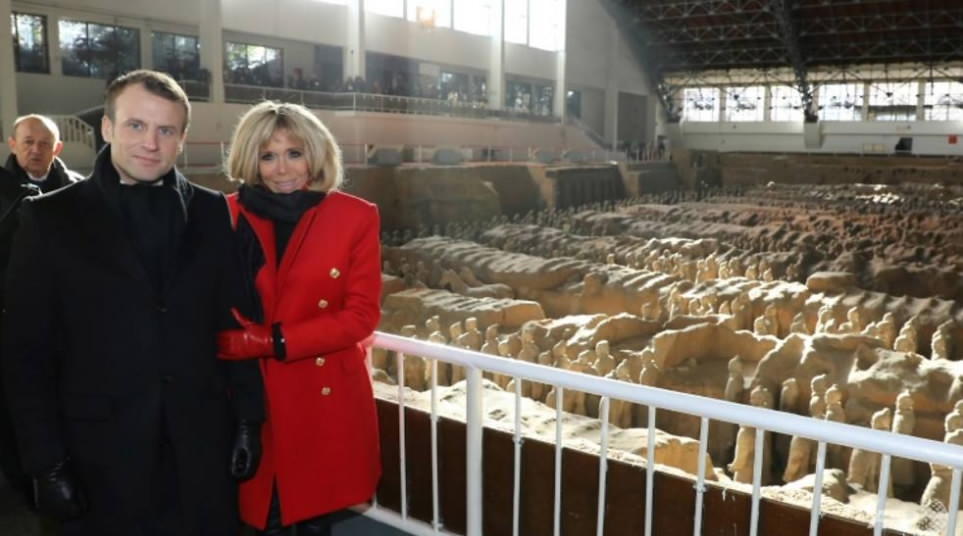 French President Emmanuel Macron and his wife Brigitte visit the famous Terracotta Army in Xi'an at the start of his first state visit to China. (Photo: AFP)

French President Emmanuel Macron launched a state visit to China in Xi'an on Jan. 8 - the starting point of the ancient Silk Road - in a nod to his counterpart's plan to revive the famous trading route.

When Macron arrives Xi’an, the capital city of northwest China's Shaanxi Province, along with his wife Brigitte, he is scheduled to visit a few places of interest before delivering a keynote speech on the future of Franco-Chinese relations at the site of the ancient Daminggong Palace during his China visit.

Macron is not the first to choose Xi'an as the first stop during a state visit: Ex-presidents Francois Mitterrand, Jacques Chirac and Nicolas Sarkozy already paid visits there before him.

An important reason is that Xi'an is the starting point for the ancient Silk Road.

Why did Macron suddenly change his mind?

According to the Elysee Palace, the decision was made after Macron discussed the Giant Wild Goose Pagoda with China’s specialist and considered this location to be particularly special when compared to the Terracotta Army. Three French ex-presidents - including Francois Mitterrand, Jacques Chirac and Nicolas Sarkozy - chose the Terracotta Warriors as their main place to visit during their China visit.

The Giant Wild Goose Pagoda, a site on the Silk Road's Chang'an (known as Xi'an today) - Tianshan (now in northwestern Xinjiang) Corridor, is rated as a National Key Cultural Relic Preserve as well as an AAAA Tourist Attraction.

After Xi'an, Macron will travel on to Beijing along with his delegation which includes some 60 business executives and institutions.