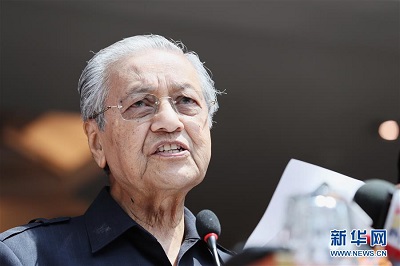 KUALA LUMPUR, May 12 (Xinhua) - Newly elected Malaysian Prime Minister Mahathir Mohamad on Saturday named three ministers in his "small cabinet" and announced the establishment of a "council of elders" to advise the government, taking the first step in governing the country.The three new ministers, all leaders of the component parties of the Pakatan Harapan (PH) coalition, are finance minister Lim Guan Eng, defense minister Mohamad Sabu and minister of home affairs Muhyiddin Yassin.Mahathir announced the appointments at a press conference after a meeting attended by key PH leaders. The three names falls short of his earlier promise to announce 10 ministers and are much fewer than the previous number of more than 25. Mahathir, admitting that "many of us have less or no experience regarding a government," said some expertise of those with knowledge or previous knowledge of any administration needed to be tapped. He said a special team of eminent persons, called the "council of elders", has been formed to advise the government on economic and financial matters during the transitional period.The council include former finance minister Daim Zainuddin, former central bank governor Zeti Akhtar Aziz, former national oil firm Petronas CEO Hassan Merican, renowned billionaire Robert Kuok Hock Nien and Jomo Kwame Sundaram, an economist.According to Mahathir, the team will assist in shaping up policies and programs to achieve the 100-day promise that PH had made to the people. Thus, he said the lifespan of this team will be 100 days.