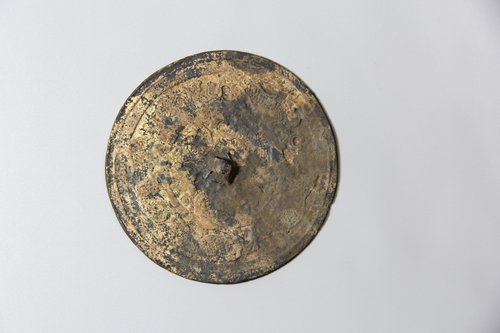 A bronze mirror unearthed at the M154 site. (Photos: Courtesy of Wang Tianyou)

When talking about past open and cosmopolitan societies in Chinese history, the first time period most people probably think of is the Tang Dynasty (618-907), an age when culture continually flowed in and out of China.

Now a recent string of archaeological discoveries have introduced us to another major period of cultural exchange centered around small Warring States period (475BC-221BC) kingdoms located in what is now Sichuan Province. On Monday, the Global Times chatted with Wang Tianyou, the leader of the archaeological team at Chengdu Institute of Cultural Relics and Archaeology, to get a better understanding of what these unearthed tombs reveal about ancient China.

"During the period of the Warring States, Sichuan included the current region of Chongqing, with two main kingdoms, Ba and Shu, occupying the same region. This led to incessant conflicts between the two as well as other neighboring kingdoms as both kingdoms wanted to advance themselves and become the dominant power in the region. Communication and cultural exchange were necessary parts of their development," Wang explained.

The excavation started in 2016, leading to the discovery of more than 180 tombs near the Qingbaijiang District in Chengdu, capital of Sichuan Province. The most recent excavations have unearthed 60 more tombs dating back to the Spring and Autumn period (770BC-476BC) located southwest of the previous site. 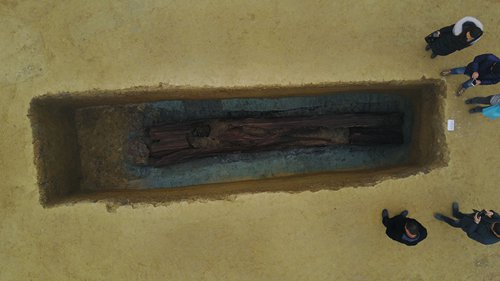 Archeologists gather around a wooden coffin discovered at the M154 site in Sichuan Province.

The king of coffins

"These tombs are miniature replications of the entire society of the time," Wang emphasized.

The current discoveries have helped reveal much about the social changes that took place in the Shu kingdom and other neighboring kingdoms. When one country rose in power, its cultural symbols would spread throughout the region. This ebb and flow of political power can be seen reflected in the art decorating the tombs and especially from the burial objects found within.

"We have found burial objects that include cultural elements from the Qin, Wu, Yue, Jin kingdoms and even from the north grassland tribes, which are perfect examples of how culture spread between areas, even those far away. It also shows that this exchange went both ways instead of just one way."

One of the more notable discoveries is a huge boat-shaped coffin made from an entire piece of Phoebe Zhennan wood, a large species of tree native to Sichuan Province. Discovered in the large M154 tomb in the northeast section of the excavation, the coffin was largely intact, which was a pleasant surprise along with its huge size.

"It is definitely the king of coffins," Wang joked.

As an added bonus, a variety of burial objects including pottery, copper and lacquer wares were also excavated along with the coffin.

The surprises kept coming as when the coffin was moved in order to ship it to the local cultural heritage protection center, a burial pit was found under the coffin.

"This is the third burial pit we have found in Sichuan so far," Wang explained.

According to the archaeologists, the pit is roughly one meter long and 55 centimeters wide and enclosed by boards and logs on each side. Six ritual bronzes were discovered within the pit.

An aerial view of the excavation in Chengdu, Sichuan Province

According to Wang, all these objects have provided valuable hints about the identity of the tomb's owner.

"We can make some assumptions based on previous discoveries and the burial objects found at the site," Wang explained.

"The M154 tomb is smaller than the other two tombs we excavated in Sichuan, Commercial Street Coffin Burial and the Tomb of Xindu Majia, both of which turned out to be tombs for a king or members of the royal family of Shu, but it is far more elaborate."

"It is the only tomb with a burial pit," Wang noted.

Wang pointed out that a number of lacquer wares, considered "luxury goods" at the time since their production was very time consuming and expensive, were discovered on site. This, along with other expensive burial items from other kingdoms discovered there, indicate that the owner must have been someone of wealth in order to afford these "luxury commodities."

Wang also pointed out that the motifs painted on the lacquer are similar to the previous two discoveries in Sichuan, which indicates that the owner of the tomb may have had some connection to the royal family.

Although these discoveries have helped paint a broad picture about the tomb's owner, archaeologists still don't know many details about his life.

"We lack written documents," noted Wang with a little frustration.

"We know much about the king, but not about lower social classes. But to dig such a large burial pit requires a lot of manpower and money, so we can assume that the owner must have been someone important."