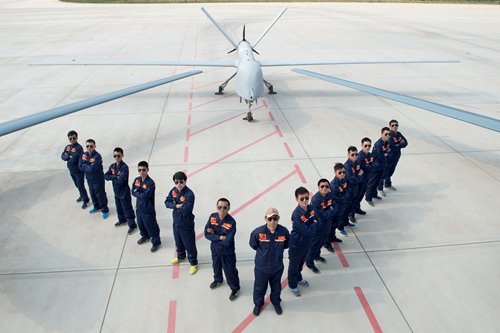 Project team personnel of the China's unmanned aerial vehicle (UAV), Caihong (CH) pose for a picture with the vehicle in June 2017. Photo: IC

China's new generation solar-powered unmanned aerial vehicle (UAV), Caihong (CH), or Rainbow, has successfully run a live-ammunition test under extreme environmental conditions recently, said the Beijing Aerospace Propulsion Institute (No. 11 Institute) under the China Aerospace Science and Technology Corporation (CASC) on January 31.The CH UAV project team told the Global Times in February that the enhanced variant of the CH-4 conducted a six-day intensive bombing test for the first time in Northwest China under extreme weather conditions including blizzards and darkness in January.The new CH drone has a better loading and power supply capability, and due to its multiple mount points design, it can carry a mixture of weapons and can shoot different types of guided missiles under different weather conditions, meeting the standards of a surgical strike, said the research team. For example, it can guide 50-kilogram cluster bombs in order to effectively complete missions including regional blockades and attacks on enemy airports. The 50-kilogram satellite-guided bombs can also deal a deadly blow on the enemy position from higher airspace, while the 100-kilogram satellite-guided weapon can launch surprise attacks on targets from more than 10 kilometers away. More compatibleSong Zhongping, a Chinese military expert and a TV commentator, highlighted the new CH vehicle's high compatibility with different types of guided weapons on February 4, saying this kind of advantage could win China a more promising international market share in the field of UAV. The effectiveness of all guided weapons, whether they are laser- or satellite- guided, can be seriously affected by weather conditions such as smog or jamming efforts from the enemy. However, as the CH new model can carry various types of weapons, it can break through these limits and work well anywhere in all weathers, Song explained. The results of the January live-round test has proven that the new CH UAV has met design and ammunition standards, said the research team, adding that the new technologies on the tested UAV will be applied to the next generation of CH-4C drones in the future.China's CH UAV, the country's first near-space solar drone, successfully conducted a flight at an altitude of 20 km in June 2017, Xinhua News Agency reported.The project team under CASC announced after the event on June 13 that the CH UAV flew smoothly in near space for over 15 hours through remote control, completing its scheduled path before landing securely.Near space, which lies 20 to 100 km above sea level, contains thin air that reduces the performance of traditional fuel-powered aircraft engines.However, solar drones like the CH UAV can perform well in this region and is able to fly continuously for months or even longer in the future, said Li Guangjia, director of the project.Cost efficientThe CH UAV, with a wingspan of 45 meters and equipped with solar panels, boasts a high cost efficiency as it does not require refueling during long-term missions, said Shi Wen, chief engineer of the project.The CH UAV will perform as a "quasi-satellite" in the future, and has the ability to supplant some functions of telecommunication satellites in providing data relay services, Xinhua News Agency reported in June 2017. It is also expected to be used as "an airborne mobile Wi-Fi hub" to provide convenient mobile telecommunication and Internet access for remote areas and islands, saving on the huge construction and maintenance costs involved in traditional communication means.The UAV will also be capable of forestry and agricultural surveying as well as early warning and real-time monitoring of natural disasters."In earthquake, flood or forest fire situations where telecommunications are cut off, the drones may provide services to maintain communication with the affected areas," Shi said.China's CH series drones have been sold to militaries in more than 10 countries including Pakistan and Turkmenistan, making it the largest drone family the country has exported.