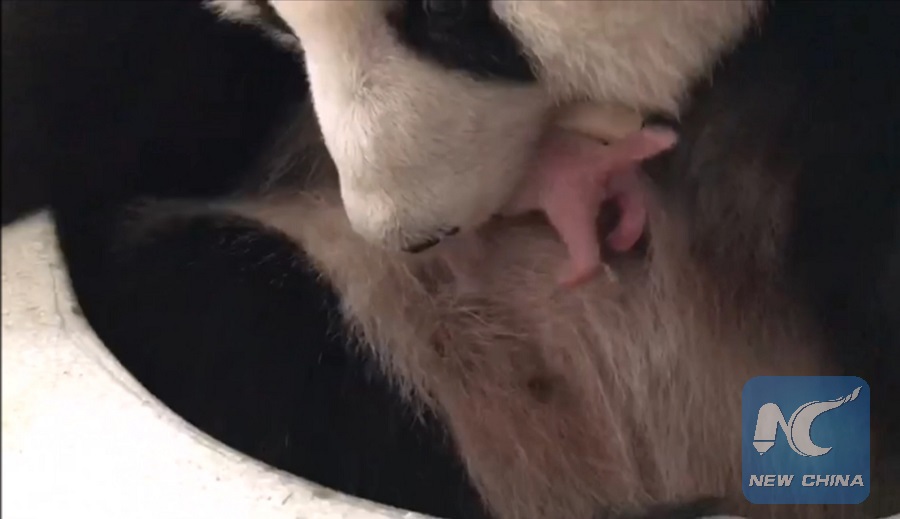 Giant pandas are known to have a low fertility rate, due to their indifference to sex, but a giant panda has given birth to a second cub since it was loaned from China to Malaysia in 2014, both via natural mating.

Wan Junaidi Bin Tuanku Jaafar, Malaysia's minister of natural resources and environment, said on Wednesday the baby panda was born on Jan. 14 at the national zoo with a weight of 150 grams, 89 days after its parents, Xing Xing and Liang Liang mated.

Both the new-born and the mother are in healthy condition, but the gender of the baby panda is yet to be determined as it is still under the mother's protection, Wan Junaidi said. They are being quarantined and will not meet the public for the time being.

A video released by the national zoo showed that the mother panda Liang Liang was holding the cub in her belly, keeping outsiders from coming near.

Usually, giant pandas only have one estrus every year, and only for three months, said Mat Naim Bin Haji Ramli, director of the Giant Panda Conservation Center of the national zoo. While the breeding season in China is from March to May, in Malaysia it starts from October due to climate difference, he said.

After its separation with the first cub Nuan Nuan, which flew back to China in November, the zoo began to monitor the behavior changes and physical changes such as hormone level of the female panda Liang Liang, according to Mat Naim.

The panda pair had a successful mating on Oct. 18, after which, Liang Liang's hormone level began to slow down.

But only when Liang Liang started to build a wooden platform in early January, a major sign of parturition, did the zoo keepers know for sure that it was having another baby, as pandas often send false pregnancy signals.

"So if you select the perfect time, you will get the perfect result," said Mat Naim, noting that the Malaysian zoo was more prepared and experienced for the second cub.

Mat Naim also highlighted the role of the male panda. "Xing Xing proves that captive male also can perform very well in natural mating. It's a good sign for conservation. Because not many -- only a few male born in captivity have good libido," he said.

When asked about the secrets of panda breeding in Malaysia, Wan Junaidi attributed to the care and love shown by the Malaysian caretakers, also noting the environment, the design of the cage as well as food provided.

One reason the Malaysian government decided to send the first panda baby back to China, according to Wan Junaidi, was because the current facilities in the zoo can only accommodate two giant pandas.

But he said on Wednesday that the Malaysian government plans to expand the giant panda conservation center so that the cub can continue its stay in Malaysia even after it grows up.