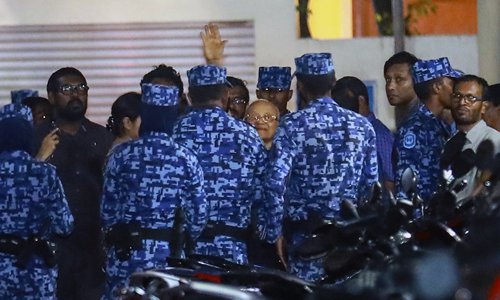 An exiled former president of the Maldives urged India on Tuesday to send an envoy backed by military to release political prisoners after the government of the Indian Ocean archipelago imposed a state of emergency and arrested two senior judges.Best known as an "A-list" holiday destination, the Maldives plunged into crisis last week after the Supreme Court quashed terrorism convictions against nine leading opposition figures including the country's exiled, first democratically elected president, Mohamed Nasheed.Having defied the court ruling to release the detainees, President Abdulla Yameen declared an emergency and ordered security forces to seize control of the court and arrest the chief justice and another judge.Nasheed, who was granted asylum by Britain after the government allowed him to leave jail for medical treatment abroad in 2016, sought Indian intervention to resolve the island nation's most serious political crisis in years."On behalf of Maldivian people we humbly request: India to send envoy, backed by its military, to release judges & pol. detainees... We request a physical presence," Nasheed said in a Twitter post.He also urged the US to block financial transactions of Yameen's government.Since Yameen took control of the overwhelmingly Muslim country of 400,000 people in 2013, his government has faced heavy criticism over the detention of opponents, political influence over the judiciary and the lack of freedom of speech.Addressing the nation on state television, Yameen said he had acted to prevent a coup, and suggested that the judges had chosen to side with his opponents because they were being investigated for corruption.As part of the crackdown, police also detained Yameen's half-brother, Maumoon Abdul Gayoom, who had ruled the Maldives for 30 years until 2008 and now stands with the opposition.China on Tuesday urged the Maldives to resolve the conflict through dialogue between the parties involved and asked Chinese tourists to cancel their travel plans to the tourist resort as the Chinese New Year holiday is approaching."We urge relevant countries to take necessary measures to ensure the safety and legitimate rights and interests of Chinese tourists," said Geng Shuang, Chinese Foreign Ministry spokesperson on Tuesday.