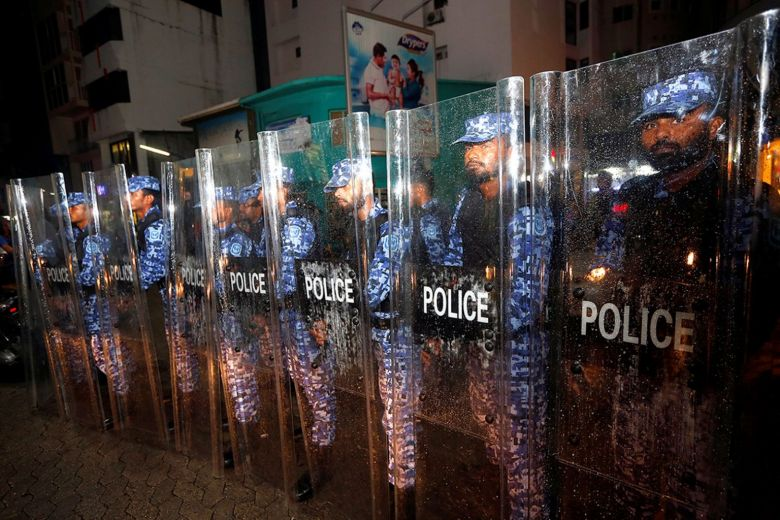 Maldivian police stand guard on a main street during a protest by opposition supporters against the government's delay in releasing their jailed leaders on Feb 5, 2018. (PHOTO: REUTERS)

A political crisis in the Maldives deepened early on Tuesday (Feb 6) after a former president and two Supreme Court justices were arrested.

President Abdulla Yameen declared a state of emergency on Monday evening and sent troops to surround the Supreme Court, which had provoked his ire last week when it overturned criminal convictions against nine of the president’s opponents and ordered that those in jail be freed.

Mr Yameen has refused to release the political prisoners. And now it appears that he is escalating the standoff, which is worrying tourists, foreign governments and countless Maldivians.

The Maldives Independent, a news website, reported late on Monday that special operations security officers had broken into the court, raising fears that the President’s forces were going to arrest the Supreme Court judges who had holed up in their offices. Several dozen protesters were also converging on the court, and witnesses said the police were trying to chase away the crowd.

The national police announced on Twitter that the Chief Justice, Abdullah Saeed, and another Supreme Court judge, Ali Hameed Mohamed, had been arrested, along with the chief judicial administrator, Hassan Saeed Hussain.

In addition, a former president, Maumoon Abdul Gayoom – the President’s half brother – was arrested, along with his son-in-law. Gayoom ruled for 30 years until 2008, and is now in the opposition. His son Faris is one of the jailed opposition figures whom the court had ordered freed.

The United States said it was “troubled and disappointed” by the state of emergency, which gave the security forces sweeping powers to arrest and hold suspects, prohibited public gatherings, imposed travel restrictions and suspended parts of the Constitution.

“Despite being elected in 2013 with the support of a broad coalition, President Yameen has systematically alienated his coalition, jailed or exiled every major opposition political figure, deprived elected Members of Parliament of their right to represent their voters in the legislature, revised laws to erode human rights, especially freedom of expression, and weakened the institutions of government by firing any officials who refuse orders that run contrary to Maldivian law and its Constitution,” the State Department said.

It called on Mr Yameen, the army, and police “to comply with the rule of law, implement the Supreme Court’s ruling and the rulings of the Criminal Court, ensure the full and proper functioning of the Parliament, and restore constitutionally guaranteed rights of the people and institutions of the Maldives".

Since last week, when the Supreme Court ordered the release of the political prisoners, opposition rallies in the capital, Malé, have grown bigger – and rowdier.

The Maldives, with around 400,000 people, is usually not a big newsmaker. It is known among tourists as something of a paradise. But climate change poses an existential threat to the islands, and in recent years a new problem has swept in: Islamist radicalism, which has security services on edge and led to the stabbing death of a blogger after he dared to criticise extremists.

Mr Yameen may feel confident that he can ride out the trouble, having drawn close to China and Saudi Arabia, both of which have invested heavily in the Maldives; there was even a plan afoot last year to sell an atoll to the Saudis.

The opposition says the President is scared to free the prisoners because he may lose his influence in Parliament, and possibly his job, if the opposition lawmakers are allowed to return.

It is hard to decipher exactly what is happening in the upper reaches of the government. Mr Ibrahim Hussain Shihab, a government spokesman, said on Monday that the President did not intend to disobey the Supreme Court, but that “procedural measures” needed to be addressed.

But The Associated Press reported that the legal affairs minister, Ms Azima Shakoor, had said the government did not believe that the high court order “can be enforced”.

The Supreme Court is not universally respected. Several of its judges have been accused of corruption.

The court ruled that the nine dissidents had not been fairly tried. Two remain outside the country, including Mr Mohamed Nasheed, a former president who has become an international celebrity because of his urgent pleas to mitigate climate change.

Mr Nasheed has vowed to run again in elections scheduled for this year, and suddenly, thanks to the Supreme Court, the next election could be a fierce one.

Another figure to watch is Mohamed Nazim, a former defence minister who was sentenced to 11 years for arms smuggling and is under house arrest. Many Maldivians say they believe he was framed, and he still commands deep support within the military, leading to concerns that the security services could split.

The tensions have already hurt the tourism industry, the largest contributor to the country’s economy. In 2015, when the government declared a state of emergency because of fears of terrorism, tourist bookings dropped and economic growth plummeted.

Since last month, the State Department has warned travellers to the Maldives to exercise increased caution, and the British government issued an advisory on Friday that visitors to Malé should “avoid any protests or rallies".

On Monday, China advised its citizens to avoid the Maldives until conditions stabilised. India did the same.

Some younger activists seemed invigorated by the standoff, however.

“For the first time in Maldivian history, a court has ruled in favour of the people and we will protest until it is enforced,” said Mr Mickail Naseem, an opposition supporter. “I have never been more hopeful for change.”