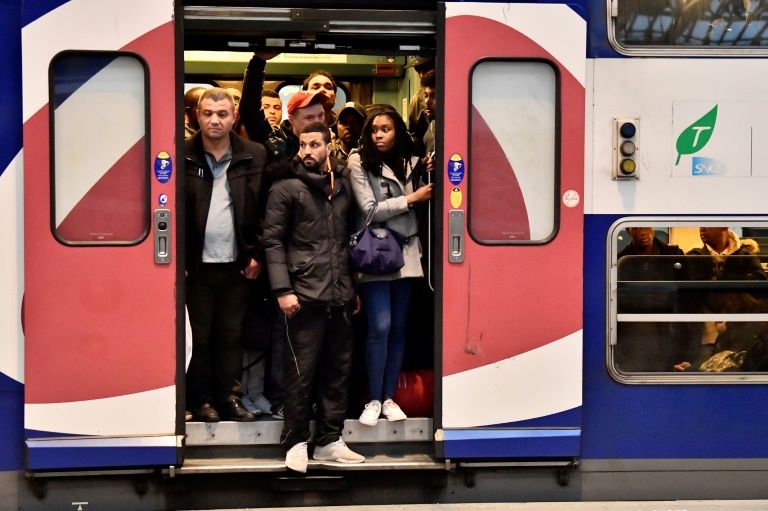 The strike will cause chaos for France's 4.5 million train passengers

More than three-quarters of train drivers joined the first day of the walkout, according to the SNCF, the heavily indebted state rail operator which Macron wants to overhaul. But overall only one-third of staff were on strike, the company said.

Only one in eight high-speed TGV trains and a fifth of regional trains were running on what French media have dubbed "black Tuesday".

And with stoppages planned two days out of five until June 28, weeks of disruption lie ahead for France's 4.5 million daily train passengers.

"We have been asking for the same thing for several weeks – that the government completely reconsiders its plan. They need to start again from scratch," Philippe Martinez, head of the CGT trade union, told France Inter radio.

Staff at Air France, garbage collectors and some energy workers are also staging separate walkouts Tuesday in a growing atmosphere of social strife 11 months after 40-year-old Macron came to power. 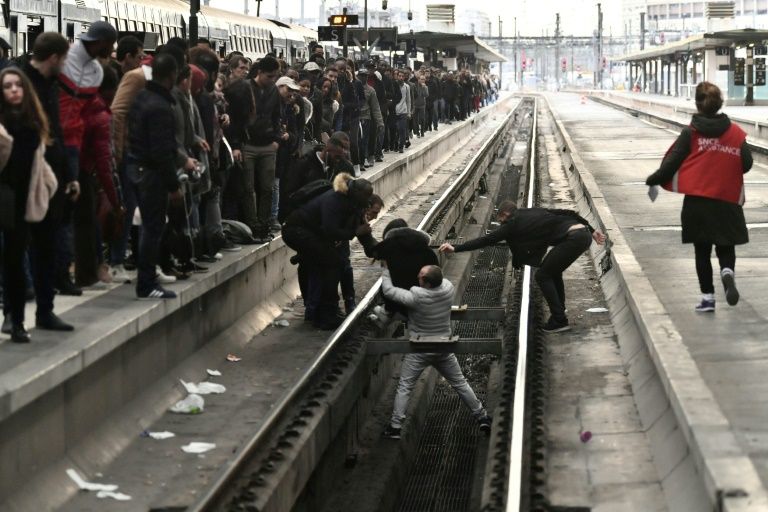 People help a woman who fell onto a railtrack at the Gare de Lyon station in Paris on Tuesday, the start of three months of rolling strikes by workers at the state railway operator SNCF.

Public support for the rail strike stands at just below half, according to an Ifop poll released Sunday, and commuters expressed a mixture of sympathy and frustration with the reduced service.

"I start work at 1:00 pm. Do you know what time I had to get up? 5:00 am," complained Jean Nahavua, a manager at a wholesale company who lives in Lille and commutes to Paris.

"Three months like this, it's going to be complicated."

Pascal Lasnier, a banker waiting at the same station, added: "I understand that they want to defend their piece of the pie, but maybe there are other ways of doing it."

As commuters took to the roads instead, the streets of Paris were snarled with an "exceptional" 370 kilometers of traffic jams during the morning rush hour before easing, according to traffic website Sytadin.

At the capital's busy Gare du Lyon station, the platforms were so crammed that a woman fell onto the tracks and had to be helped out by fellow passengers.

But major regional stations including Nice, Lille and Marseille were virtually deserted as travellers anticipated cancellations.

Three-quarters of Eurostar trains to London and Brussels were running on Tuesday and Thalys trains towards Belgium and the Netherlands were operating almost normally, but there were none at all to Spain, Italy or Switzerland.

At Air France, where staff are striking for the fourth time in a month to demand a pay rise, managers said 75 percent of flights would operate. Further walkouts are planned at the airline for April 7, 10 and 11. 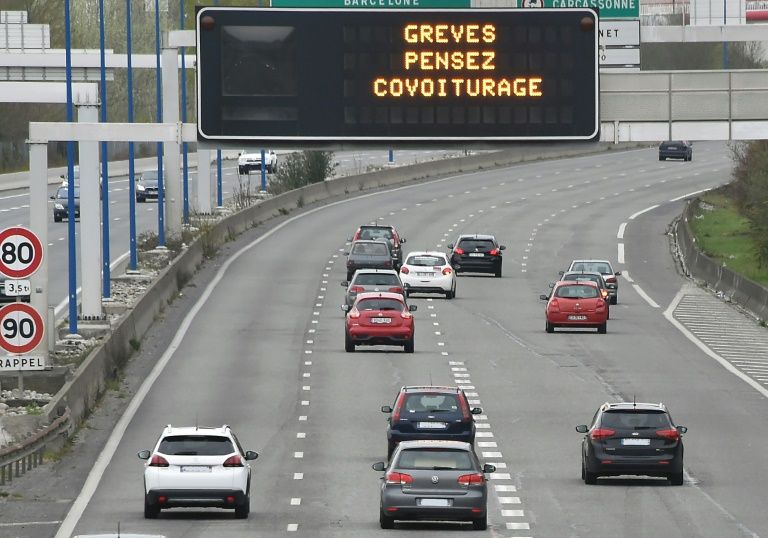 Cars drive past a sign reading "strike: think carpool" on a highway in Toulouse, southwestern France

Thanks to the internet and mobile apps – technology unavailable the last time France saw rolling rail strikes on a comparable scale in 1995 – many commuters were able to work from home Monday or arrange car-pools.

There was no respite expected before the second day of walkouts on Wednesday, and the economy is set to take a hit as the strike rumbles on.

Alain Krakovitch, chief of the SNCF's Transilien network, estimated the cost of the strike at "between 10 and 20 million euros ($12.3 to 24.6 million) a day.

Macron says the SNCF, saddled with 46.6 billion euros ($57.5 billion) of debt, needs to drastically improve its efficiency and cut running costs as EU countries prepare to open passenger rail to competition by 2020.

His government is planning to stop granting the rail workers' special status – which guarantees jobs for life and early retirement – to new SNCF hires entering the company.

It also wants to combine the three bodies that make up the SNCF into a single state-owned company, prompting fears among unions that it could be a step towards privatizing the rail operator.

The stakes are high for both sides in the standoff.

The rail strikes are being seen as the biggest challenge yet to Macron's sweeping plans to liberalize the French economy and make it more competitive, earning comparisons to Margaret Thatcher's 1984 showdown with Britain's coal miners.

For France's once fearsome unions, it is a major test of how much influence they still hold.

"The question is whether people will support a strike movement that will block the country for weeks," political analyst Stephane Rozes told the 20 Minutes newspaper.

"That's what could allow the strikers to hang on and make the government back down." 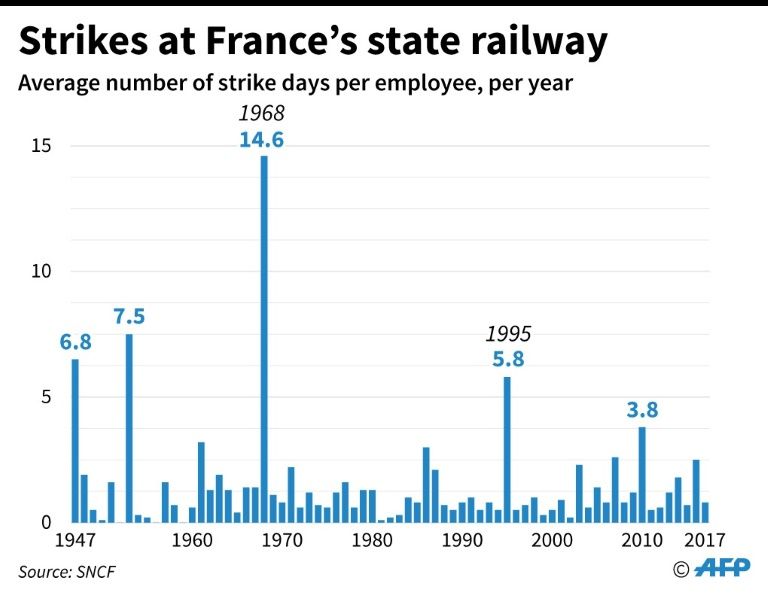