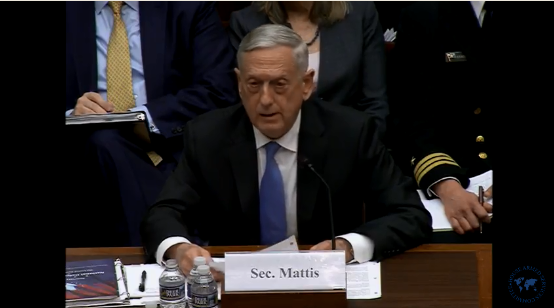 "The Pentagon will continue to prosecute the campaign against terrorism, but great power competition - not terrorism - is now the primary focus of US national security,” US Defense Secretary James Mattis told lawmakers during a hearing Tuesday morning.

Mattis, joined by Air Force Gen. Paul Selva, vice chairman of the Joint Chiefs of Staff, was at a hearing of the House Armed Services Committee focused on the Nuclear Posture Review - outlined last Friday at the Pentagon and the National Defense Strategy - unveiled last month. Both documents have outlined a geopolitical environment defined by more strategic competition.

Mattis reiterated that the Pentagon recognizes great power competition is once again a reality.

"Nations as different as China and Russia have chosen to be strategic competitors. They seek to create a world consistent with their authoritarian models and pursue veto power over other nations’ economic, diplomatic, and security decisions," he said.

The focus of Mattis’testimony was to persuade the US Congress to give the armed forces more funding. He told the House committee,“I regret that without sustained, predictable appropriations, my presence here today wastes your time, because no strategy can survive without the funding necessary to resource it. We all know America can afford survival.”

The harsh rhetoric of the secretary was expected to cause discontent in China and Russia. Earlier this week, a spokesperson of China’s Foreign Ministry remarked that the latest Nuclear Posture Review of the Pentagon, together with the previously released US National Security Report and National Defense Strategy, cling to an "outdated cold-war mentality" and "zero-sum game mindset," and play up geopolitics and great power competition against the dominant theme of our times, peace and development.