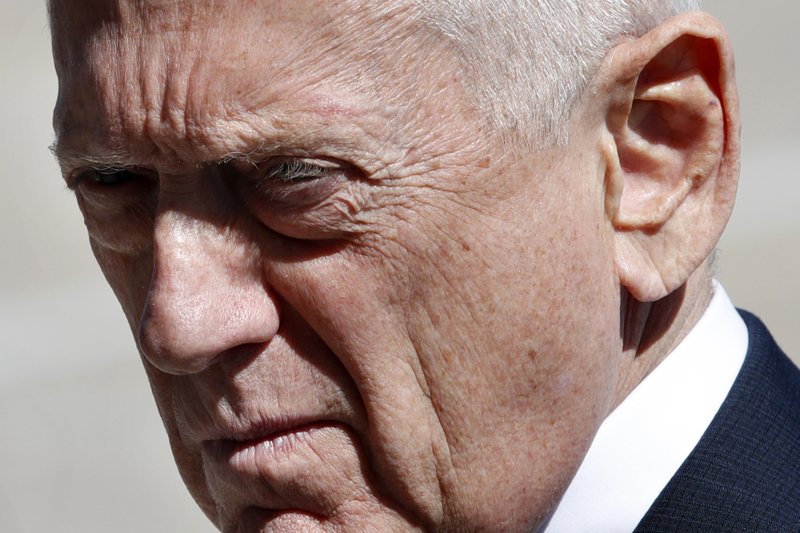 “I look forward to working with him -- no reservations, no concerns at all,” Mattis told reporters at an impromptu news conference. “Last time I checked he’s an American. I’m not in the least bit concerned.”

Mattis said he has never met Bolton, a former ambassador to the United Nations and conservation firebrand. He said he expects Bolton to pay a visit to the Pentagon soon, perhaps this week, to begin developing a relationship.

“I’ll tell you right up front: it’s going to be a partnership,” he said. When a reporter mentioned that people see his world view as significantly different than that of Bolton, Mattis replied, “That’s the normal thing you want, unless you want group-think.”

Bolton, who will replace Army Lt. Gen. H.R. McMaster on April 9, has publicly advocated for overthrowing the North Korean government, possibly by force. Mattis, a retired Marine general who knows intimately the costs of war, favors diplomacy to rid the North of its nuclear weapons and has said war on the Korean peninsula would be “catastrophic.” On Iran, too, Mattis would seem at odds with Bolton, who has argued for abandoning the Obama-era nuclear deal.

These and other matters of war and peace will test Mattis’ influence with Trump as his national security team is overhauled.

Mattis was sometimes at odds with McMaster, but the arrival of the hawkish Bolton, combined with the firing of Secretary of State Rex Tillerson and the uncertain status of John Kelly as White House chief of staff, appears to leave Mattis more isolated than at any time since he took over the Pentagon 15 months ago.

The North Korea issue is front-and-center: Trump has agreed to meet with North Korean President Kim Jong Un by May to discuss the North’s nuclear disarmament. The unprecedented summit could be a turning point in a decades-old U.S.-North Korean standoff that Trump himself has said could end in “fire and fury” - an American nuclear attack __ to stop the North from gaining the ability to strike the U.S. with a nuclear missile.

“This is buckle-up time,” retired Navy Adm. James Stavridis, dean of the Fletcher School of Law and Diplomacy at Tufts University, said last week on MSNBC. “For the military I have three words: Sharpen your swords. He (Bolton) is someone who is going to reach for the military instrument.”

The changes in the White House and at the State Department, while significant for Mattis, are hardly heart-stopping. People close to him sense no change in his commitment to the job; some suggest that Trump’s decision to move former Republican congressman and current CIA director Mike Pompeo to State, replacing Tillerson, could benefit Mattis in the sense that he’ll have a partner at State who is better aligned with Trump.

Publicly, Mattis has said little about the shakeup. He was in Afghanistan when Tillerson got the ax. When reporters asked his reaction a couple of days later, Mattis said he preferred not to comment on the details, although he went on to suggest that its importance was being exaggerated. He said that in all of his discussions abroad with foreign government officials and American troops, the matter was not brought up once.

“I understand why you’re asking, but I’m just pointing out that in most parts of the world this is a Washington, D.C. story,” he said.

Another Washington story is Mattis and his ability to forge a workable relationship with Trump despite differences on some issues like the Iran nuclear deal, which Mattis says is flawed but worth honoring as long as the Iranians do. Mattis also has differed with the president over Trump’s wish to bar all transgender people from serving in the military, and he helped sway Trump from his inclination last year to end U.S. military involvement in Afghanistan.

The Mattis formula seems to be simple. Out of the spotlight, out of trouble. The less he says publicly, the less he risks losing influence with Trump.

“Part of his success ... is absolutely the fact that you don’t see him in the limelight terribly much,” says Loren Dejonge Schulman, a defense analyst at the Center for a New American Security who served in key national security positions in the White House and Pentagon under President Barack Obama. “That may be keeping him out of trouble with the White House but I think it’s setting an incredibly bad precedent in terms of Pentagon transparency.”

If Mattis, who spent more than 40 years in uniform and is the first career military officer to lead the Pentagon since George C. Marshall in the early 1950s, isn’t the most experienced politician to run the military’s vast bureaucracy, he has shown a knack for staying out of trouble with his thin-skinned boss.

Mattis has even broken Trump of his habit of calling the retired general “Mad Dog,” which Mattis insists was a media invention to begin with.

Trump frequently has lunch and dinners with the defense secretary and speaks glowingly of him to outside advisers. White House officials have said that Trump sometimes repeats military historical anecdotes he heard from Mattis.

Even Mattis’ few known stumbles have not dogged him. In August, for example, Mattis told sailors at a submarine base in his home state of Washington that the Navy would give them the worst and the best days of their lives, and then added, “That means you’re not some (expletive) sitting on the sidelines,” he said. “You know what I mean, kind of sitting there saying, ‘Well, I should have done something with my life.’”

His language was quickly forgotten.

The episode pointed to a man who has shaped the job and not let it shape him. So much so that perhaps the most poignant criticism of his tenure has been the secrecy with which the military has handled everything from troop deployment numbers to the details of its military strategies — things that often were made public under previous secretaries.