HEADLINE May seeks EU backing against Russia on spy attack

May seeks EU backing against Russia on spy attack 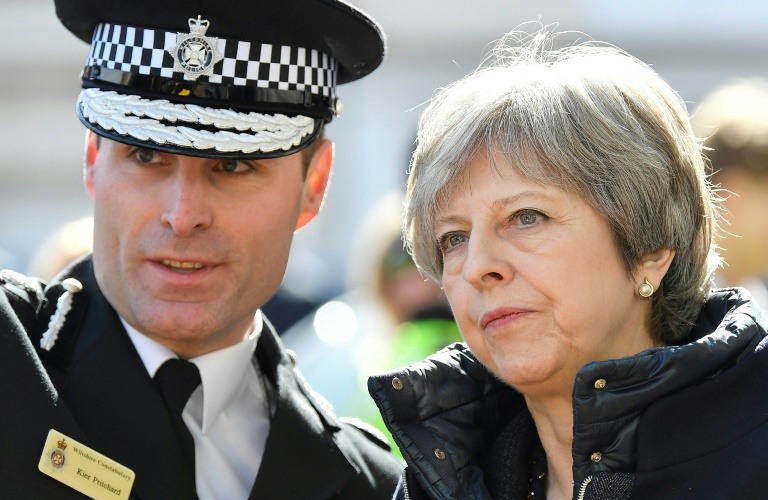 Britain's Prime Minister Theresa May will brief EU leaders on the progress of the investigation into the poisoning of a former Russian spy.(Photo: AFP)

British Prime Minister Theresa May on Thursday warned EU leaders that Russia posed a threat to the whole bloc as she sought united backing against Moscow after the poisoning of an ex-spy in England.

May told her colleagues at a Brussels summit the attack on Sergei Skripal and his daughter Yulia in the English city of Salisbury using a deadly Soviet-developed nerve agent showed the Russian threat "doesn't respect borders".

While the US, France and Germany have swung behind London, saying they accept the UK assessment that the Russian state is the only plausible culprit, other EU countries keen to protect their Kremlin ties -- notably Greece and Italy -- want a softer line.

"It is clear that the Russian threat doesn't respect borders and indeed the incident in Salisbury was part of a pattern of Russian aggression against Europe and its near neighbours," May told reporters as she arrived in Brussels.

She is expected to tell them over dinner that the threat from the east will continue "for years to come", and long after Britain leaves the bloc in 2019.

The British leader will hold crisis talks on the poisoning with French President Emmanuel Macron and German Chancellor Angela Merkel before briefing all the EU leaders on the investigation.

The poisoning has triggered a furious diplomatic row between London and Moscow, with tit-for-tat expulsions of diplomats on both sides, while the Kremlin denies any responsibility and Russian state media have offered numerous alternative explanations.

British officials have been pressing European allies to follow London's lead with their own expulsions of Russian diplomats, and Lithuania's outspoken President Dalia Grybauskaite said she was giving serious thought to the matter.

"We support the measures UK is applying and all of us we are considering such measures," Grybauskaite said as she arrived for the summit.

EU President Donald Tusk said on the eve of the summit that leaders will show "solidarity" with Britain after Salisbury and called the bloc to take practical steps to "reinforce our preparedness for future attacks".

There was renewed backing for Britain from the US as President Donald Trump pledged during a phone call with Macron on Wednesday that he would "take action to hold Russia accountable" for the poisoning.

EU leaders will issue a statement on the Salisbury attack on Thursday, with a draft seen by AFP saying they will "coordinate on the consequences" for Russia but stopping short of blaming Moscow or mentioning sanctions.

Some countries are pushing to toughen up the statement to bring it in line with last week's joint declaration by Britain, France, Germany and the US pointing the finger at Russia.

A source in the French presidency said it was "very likely" the statement would be "quite close" to last week's joint statement.

But a dissenting rump including Greece, Italy, Cyprus and Austria, keen to preserve their good relations with Moscow, has pushed for the watered-down version, which says only that the EU takes "extremely seriously" London's view that Moscow was to blame.

Greek Prime Minister Alexis Tsipras urged caution in the response over Salisbury, saying "we have to be very responsible".

Luxembourg Prime Minister Xavier Bettel was also cautious, saying that "I am a former criminal lawyer. I have the principle that first I listen, and then I draw conclusions."

The poisoning comes with worries running high across Europe about Russian meddling -- from repeated cyber attacks, particularly in the Baltics, to what the EU has called an "orchestrated strategy" of disinformation aimed at destabilising the bloc.

Further exposing EU divisions, Tusk said Wednesday he was "not in the mood to celebrate President Putin's reappointment", a day after European Commission chief Jean-Claude Juncker sent the Russian strongman a congratulatory letter.

Aside from Salisbury, the two-day summit will also discuss trade. As the leaders gathered, news emerged from Washington that Europe would be excluded for now from new US tariffs on steel and aluminium imports.

The leaders will also discuss the scandal over harvested data from Facebook used by a British consulting firm employed by Trump's 2016 campaign team. Tusk said this was "particularly relevant" in the light of broader threats such as election meddling.

May will depart the summit on Thursday evening, leaving the remaining 27 on Friday to approve a post-Brexit transition period and adopt guidelines for talks on future relations including a trade deal.