HEADLINE McDonald's torched, 200 arrested in May Day protests in Paris

McDonald's torched, 200 arrested in May Day protests in Paris

French anti-capitalist protesters clashed with police in Paris on Tuesday on the sidelines of a march for the annual May Day workers' rally. (Photo: AFP)

Nearly 200 anarchist protesters were arrested Tuesday after May Day riots in central Paris, where hooded youths torched a McDonald's restaurant and several vehicles during a march against President Emmanuel Macron's public sector reforms.

Shouting slogans such as "Rise up, Paris" and "Everyone hates the police", around 1,200 people in black jackets and face masks joined the traditional May 1 union-led demonstration for worker's rights, according to a count by Paris police.

After trying to hold up the march a group of protesters ran amok along the route, destroying a McDonald's restaurant near Austerlitz station, east of the city centre, and setting it ablaze.

They also torched vehicles at a car dealership, along with a mechanical digger and a scooter, leaving a trail of destruction and plumes of dark smoke billowing into the air.

The worst unrest in months in Paris comes at a time of heightened tensions over Macron's reform of the public sector and follows a showdown between police and anticapitalist squatters at a sprawling commune in western France.

The police used tear gas and water cannon to disperse the demonstrators.

Around 200 people were arrested, according to a police statement. Three were found in possession of illegal weapons, it said.

The police had warned of the risk of extremist groups using May Day to set up a rematch of the clashes seen during demonstrations last year over Macron's labour reforms and at an anti-capitalist camp in western France that was demolished by police earlier this month.

"Macron makes us mad," read a banner held by one masked demonstrator.

"We're tired of this capitalist system that destroys everything and of brutal police repression of all those who oppose it," a 19-year-old student who was part of the group told AFP. 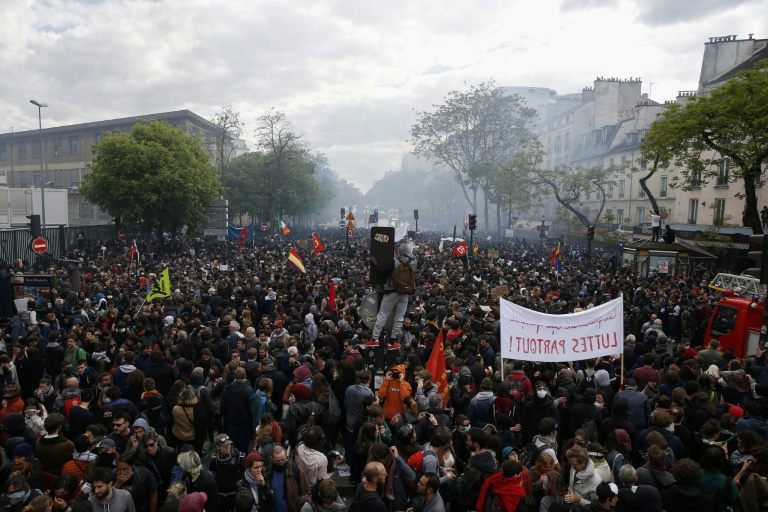 Tens of thousands of people took part in marches nationwide, including over 20,000 in Paris, the police said. (Photo: AFP)

"Everything is being done to end this serious disturbance to the peace an find those responsible for these unspeakable acts," he tweeted.

The scenes of looting and destruction overshadowed the May Day march, which drew between 20,000 and 55,000 peaceful protesters according to police and union estimates.

Countrywide, around 143,000 people took part in labour marches, according to government estimates, up slightly on 2017.

Trade unions and students' unions have been trying to rally the French against Macron's shake-up of indebted state rail operator SNCF and access to public universities, which they see as part of a rollback of France's cherished public service.

Polls show the French supporting those reforms but being more critical of Macron's fiscal policy, seen as favouring the wealthy over the working- and middle classes. 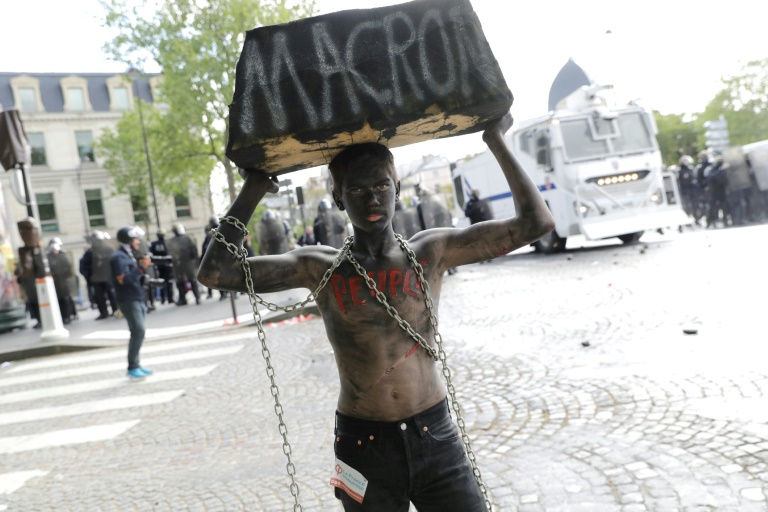 The unrest comes at a time of heightened tensions over President Emmanuel Macron's reform of the public sector. (Photo: AFP)

"Macron is the president of the rich," Genevieve Durand, a retired public servant who took part in a march in the central city of Clermont-Ferrand told AFP, echoing a label that has clung to the centrist.

The energetic 40-year-old, who vowed during campaigning to make France more competitive, has insisted he will not budge from his course.

"I'm doing what I said I would," he said during a recent television interview to mark the first anniversary of his election on May 7.