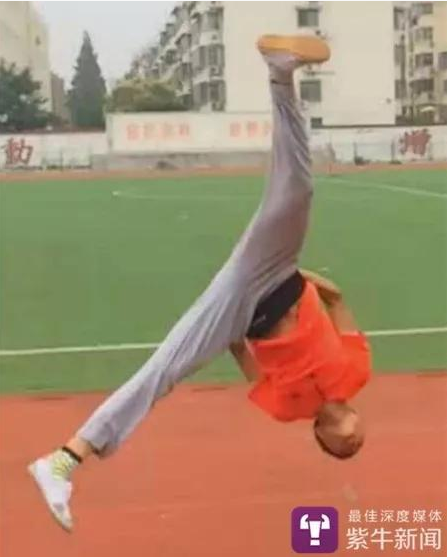 Wang Fei, an automobile mechanic in Southeastern China’s Jiangsu Province, has been obsessed with Kung-fu for as long as he can remember, Yangtzi News reported.

Without any professional training, Wang uses the early morning hours to work on side flips and do push-ups while balancing on the tips of his two fingers, and once he finishes working out, he’ll flip all the way to work.

According to Yangtzi News, Wang said he practices Kung-fu to stay healthy and help those in need. He has no desire to become famous for how he has chosen to live his life.

“I learned Kung-fu in the second grade. I was so obsessed with the art of lightness depicted in Chinese Kung-fu movies that I made up my mind to practice it. Since then, it has always been a ‘must-do’ for me,” Wang said.

In 2015, Wang’s martial art skills came in handy when he stood up to a thug who was bullying a young girl. When the guy tried to attack him, Wang struck him first, pinning him to the ground. It was just enough to scare the attacker, who quickly ran off once he was able to pick himself up off the ground.

“The Kung-fu I practice may not be the same style in movies, but I love it. It is an important part of my life. I will keep practicing it until my body says ‘NO’,” Wang said.