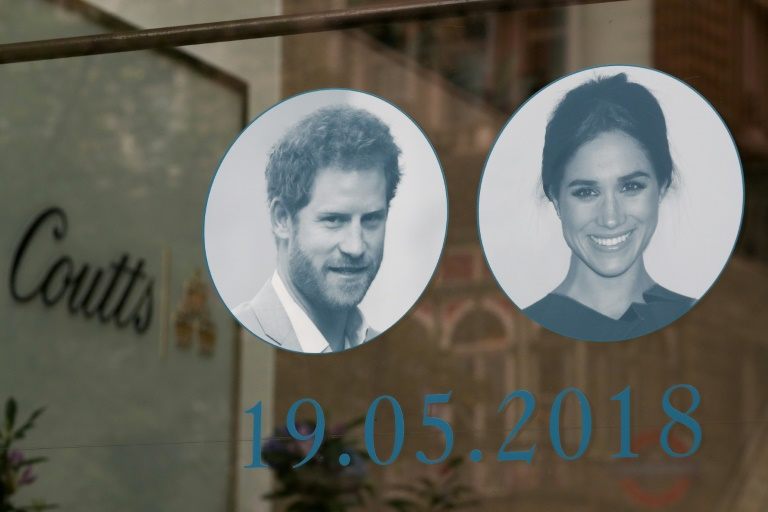 Pictures of Britain's Prince Harry and his fiancee, US actress Meghan Markle are displayed in a shop window in central London (Photo: AFP)

Meghan Markle confirmed Thursday that her father will not be present to walk her down the aisle when she marries Prince Harry, in a late announcement hinting at disarray behind Britain's meticulously planned royal wedding.

"Sadly, my father will not be attending our wedding. I have always cared for my father and hope he can be given the space he needs to focus on his health," she said in a statement issued through Kensington Palace, Harry's official residence.

Thomas Markle, 73, underwent heart surgery on Wednesday following a paparazzi scandal and a series of U-turns over his intention to attend.

The pre-ceremony fiasco would be enough to derail most weddings, but on Thursday preparations in Windsor, west of London, ploughed ahead with a military dress rehearsal to fine-tune arrangements ahead of the big day.

The practice session saw military marches and a dry-run of the carriage procession, which will whisk Harry and his bride around the town to greet the crowds after their wedding at St George's Chapel in Windsor Castle.

Diehard royalists have already started camping out in the town to secure the best viewing spots along the carriage route.

But among the tourists milling around the historic town ahead of the big day, there was concern about the last-minute crisis in the Markle family.

"I do feel a bit sorry for her. It's all so complicated isn't it? Families are always complicated," said Annie Warwick, a tourist visiting Windsor with her daughter, Katie.

Ian Dance, a tourist from the town of Swindon in western England, told AFP: "Quite honestly she must be devastated. But I think Harry, he's a good lad, he'll make sure that she's all right".

Mel Killilea, from Lancashire in northwest England, who was taking part in the town's preparations for the event, expressed concern for Markle's father.

"I hope that the press leave him alone and they give him a chance to actually recover and look after himself, and I hope this doesn't spoil her day at all," she said.

Until now, Kensington Palace has tightly planned and closely controlled the drip-fed revelations about details of the wedding day.

The Sun tabloid ran a front page saying Thomas Markle was "alone, ill and afraid", citing sources saying Kensington Palace had neglected to support him in the run-up to the wedding.

The Mirror also reported disarray, saying: "According to royal sources, 'hardly anyone has met Meghan', Harry is attempting to organise everything 'by himself' and the bride's dad, who is not attending the wedding, has been left unprepared for the fanfare."

"Instead of an expertly planned and repeatedly rehearsed event, Kensington Palace appears to be winging it."

Thomas Markle's appearance at the wedding has been under a cloud of doubt throughout the week.

He was originally reported to have pulled out of the ceremony after a paparazzi scandal, where he allegedly posed for a set of staged photos sold for a reported £100,000 (114,000 euros, $135,000) -- in a breach of royal etiquette.

US celebrity news website TMZ cited sources as saying that he felt too embarrassed to attend the wedding.

He then signalled his intention to attend after being contacted by Markle via text, according to TMZ, but questions remained as he was due to undergo heart surgery with just days to go before the wedding.

Meghan Markle's statement confirmed that her father would not attend the wedding for health reasons.

"I would like to thank everyone who has offered generous messages of support. Please know how much Harry and I look forward to sharing our special day with you on Saturday," Meghan Markle added in the statement.

TMZ reported Thursday that Thomas Markle was alert and out of surgery after having stents implanted.

"I'm ok. It will take a long time to heal. Staying in the hospital a few more days," the site quoted him as saying.

He has suggested that his ex-wife Doria Ragland, the bride's mother, would be the best person to stand in and walk her down the aisle.