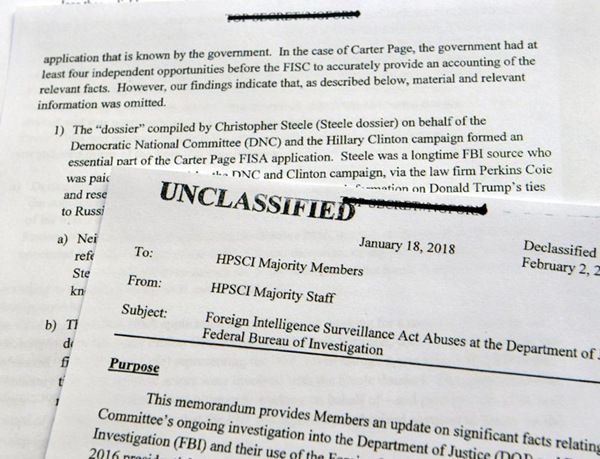 Washington (People's Daily) - The release of a four-page memo alleging FBI abuse of surveillance authority, which has roiled Washington for weeks, has also triggered hot debates within Washington political circles.
The memo alleges how FBI and Department of Justice (DOJ) officials abused their surveillance authority, especially when it tried to get a court order allowing them to surveil onetime advisor to US President Donald Trump, Carter Page.
In Washington, people believe anger and partisanship have replaced truth and justice. The memo release will not only widen the gap between the two parties but also further aggravate relations between the White House, FBI and the DOJ.
Trump tweeted on Saturday that the memo “totally vindicates” him in the special counsel investigation regarding alleged collusion between Russia and his presidential campaign. Trump said the it was an American disgrace.
However, GOP House Speaker Paul Ryan said on Thursday that the memo has no bearing on the Russia probe.
Ryan spoke during a news conference that the memo was focused on potential misuse of FISA and “does not impugn the Mueller investigation or the deputy attorney general.” Ryan has also supported releasing the Democratic rebuttal to the memo.
Democratic Representative Jerrold Nadler released a six-page rebuttal memo he's circulated to colleagues and media.
The document claims the memo is “deliberately misleading and deeply wrong on the law.” It also says the memo “does not provide a single shred of evidence” that the information in the Trump-Russia dossier was “inaccurate in any way.”
Bureau officials say the accusations in the document are inaccurate and will corrode the agency’s ability to remain independent and do its job in the long term.
FBI, known for its “non-political” stance and has been trusted for decades to investigate corruption inside the government, including the White House, is now undergoing a political crisis.
The public attacks from the president have diminished morale inside the FBI.
Former FBI Director James Comey, who was fired by Trump last May said that this memo was underwhelming and not worth the damage it did.
Christopher Wray, who was hand-picked by Trump to replace Comey, opposed the release of the memo and has encouraged FBI officers to “keep calm and tackle hard” in an internal video on Friday, saying that “in the end, actions speak louder than words.”
Wray still believes in relying on long-standing law enforcement policies and procedures, thinking the FBI can navigate through the current political storms.
Former Watergate reporter Carl Bernstein said the memo is a disingenuous partisan document.
A CNN op-ed claims that many of the criticisms excited in the memo may not even be relevant at all. The earth-shattering, Watergate-like revelations are equally empty claims..
Senator John McCain, who has always opposed the release of the memo, warned that attacks on the FBI and the Justice Department undermines the law and works as a favor to Russian President Vladimir Putin.
But for Trump, the release of the memo is more like a personal victory, and the Republican Party has finally fought for him.
Analysts have said that Mueller’s goal is to deliver a report that will be seen as legitimate has been made harder with public opinion, and Republicans are likely to follow.
Despite differences and contradictions, it seems both sides all agree on one thing, America is going through a disgraceful period.