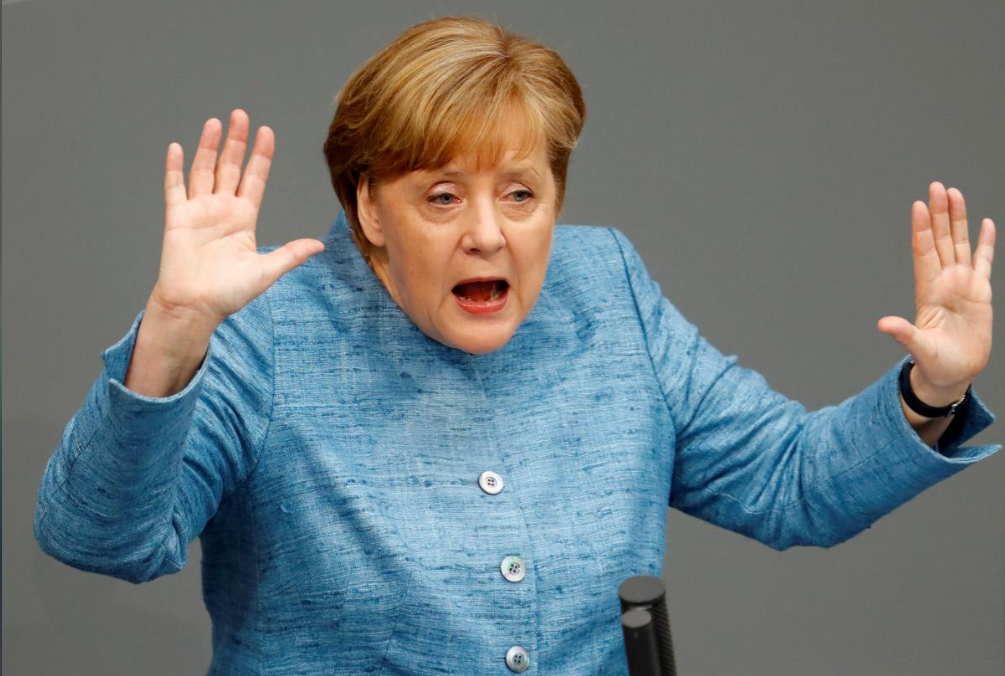 German Chancellor Angela Merkel speaks during the 2018 budget debate at the lower house of parliament Bundestag in Berlin, Germany, May 16, 2018 (Photo: Reuters)

German Chancellor Angela Merkel pushed back on Wednesday against Washington’s rejection of the Iran nuclear deal, saying the accord helped outside powers worried about Tehran’s regional role to pursue their concerns with the Islamic Republic.

Iran reiterated it would not surrender to US pressure and would resist US “plots”, following President Donald Trump’s abandonment of the 2015 agreement last week.

Repudiating the result of more than a decade of diplomacy, Trump complained that the deal does not cover Iran’s ballistic missiles, its role in regional wars or what happens after the pact begins to expire in 2025.

Major European countries share Trump’s concerns but argue that the nuclear deal is the best way to stop the increasingly influential regional power from obtaining an atomic weapon.

Merkel reasserted a defense of the deal in remarks to lawmakers in the Bundestag lower house of parliament.

“This agreement is everything other than ideal, but Iran is, according to all the knowledge of the international nuclear authorities, sticking to the commitments of the agreement.”

The deal between Iran and six world powers lifted most international sanctions in 2016 in return for Tehran curbing its nuclear program, under strict surveillance by the U.N. nuclear watchdog.

Trump last week announced he planned to reimpose an array of sanctions lifted by the accord, and the US Treasury on Tuesday imposed sanctions on Iran’s central bank governor, three other individuals and an Iraq-based bank.

Iran meanwhile said the new US sanctions were an attempt to derail efforts to save the deal.

“With such destructive measures, the American government is trying to influence the will and decision of the remaining signatories of the JCPOA (nuclear agreement),” Iranian Foreign Ministry spokesman Bahram Qasemi was quoted as saying by Fars news agency.

Iran has described the sanctions as illegal and has warned that if talks to rescue the accord fail, it would ramp up its nuclear program to a level more advanced than before.

Iranian President Hassan Rouhani said Trump expected Tehran to leave the deal after the US withdrawal, but Tehran had refused to follow that plan by trying to save the deal with its remaining signatories.

“Trump played his first card, but miscalculated the second move,” Rouhani was quoted as saying by the ISNA agency.

He also said Iran would not surrender to US pressures.

“They think they can make the Iranian nation surrender by putting pressures on Iran, by sanctions and even threats of war... The Iranian nation will resist against the US plots,” Rouhani was quoted as saying by ISNA news agency.

However the top advisor to Iran’s Supreme Leader Ali Khamenei said he doubted Tehran’s talks with European nations to save the deal would be successful.

“I doubt that the talks with the Europeans will be fruitful. I hope we see good results, but .... we should become self-sufficient,” Ali Akbar Velayati said, Fars news agency reported.

European powers this week vowed to shore up the deal by trying to keep Iran’s oil and investment flowing, but admitted they would struggle to provide the guarantees Tehran seeks.

British, French and German foreign ministers met in Brussels on Tuesday to see how they can save the nuclear deal without the United States, but appeared hard-pressed over how their companies could continue doing business with Iran once Washington begins to reimpose sanctions.

Iranian Foreign Minister Mohammad Javad Zarif said his meeting with European Union officials in Brussels had been a good start, but he wanted to see guarantees materialize.

The Europeans and Iranians have tasked experts to come up with measures quickly and will meet again in Vienna next week.

Reuters reported on Wednesday that a senior Iranian official has met Chinese oil buyers this week to ask them to maintain imports after US sanctions kick in.