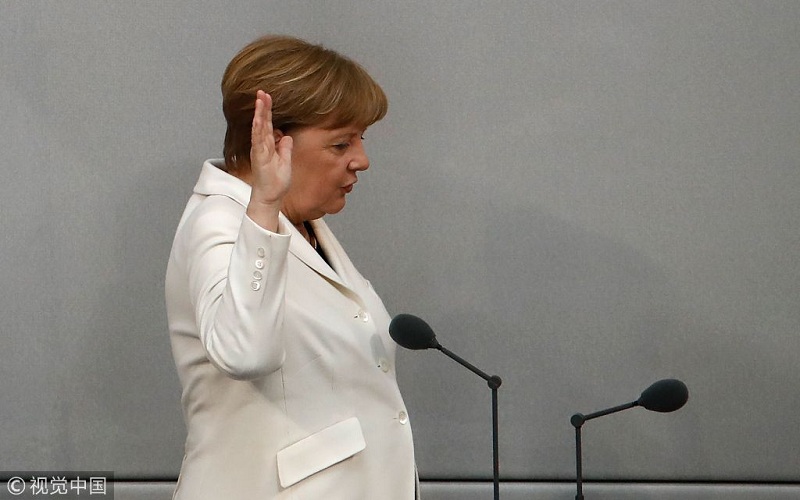 Berlin (People’s Daily) — German lawmakers voted on Wednesday to re-elect Angela Merkel as chancellor for a fourth term, as she takes charge of a fragile coalition.

Bruised by half a year of post-election coalition haggling, the coalition of her conservative CDU/CSU alliance only turned out of desperation to the center-left SPD to prolong the “grand coalition” that has governed Germany since 2013.

Merkel’s authority has been troubled since 2015 due to her decision to adopt an open-door policy for refugees to enter Germany, with an estimated annual influx of around 500,000 people.

The rise of populist fringe parties is also the central domestic threat for Merkel's new coalition, which faces the far-right Alternative for Germany as the biggest opposition party.

In office since 2005, Merkel has dominated Germany's political landscape and steered the European Union through economic crisis.

Reform of the EU is among the top topics in the coalition agreement, as dissidents inside the grand coalition have voiced their concerns over the refugee issue.

Macron warned in the Frankfurter Allgemeine Zeitung daily that without Germany on board, "part of my project would be doomed to failure.”

"We are completely dependent on each other. I do not believe for one second that a European project without or against Germany could succeed."

Merkel's incoming coalition has broadly welcomed Macron's bold reform plans, meant to reinvigorate the bloc and counter extremists and populists who have made major gains in Western democracies.

A trade standoff with the United States is also among the challenges Merkel faces. She has said Germany does not want a trade war with the US, adding negotiation is her first choice.

Top: German Chancellor Angela Merkel takes the oath as she is sworn in as Chancellor during a session at the Bundestag (lower house of parliament) in Berlin on March 14 in Berlin. (Photo: VCG)