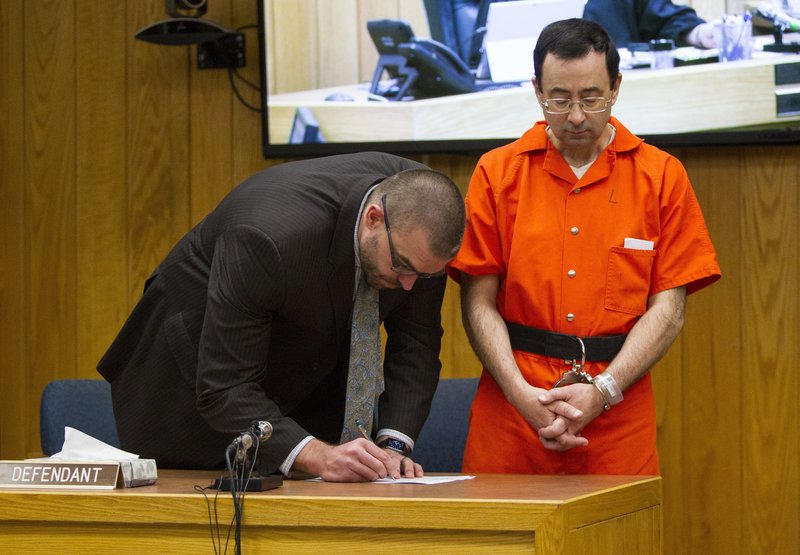 Michigan State University said Friday it plans to fire the former dean of its osteopathic medicine college and has suspended its radiology chairman in the wake of former sports doctor Larry Nassar’s sentencing for molesting young female athletes.

Interim President John Engler said the first step has been taken to revoke the tenure of Dr. William Strampel, who until December led the College of Osteopathic Medicine.

A Title IX probe conducted by the university cleared Nassar of sexual assault allegations in 2014. He was advised by the school to avoid being alone with patients while treating their “sensitive areas,” but the school did not enforce its request. Last March, Strampel told a campus detective and an FBI agent that he did not follow up because having a chaperone in the room for a sensitive exam is “health care 101.”

Engler said the university will not cover Strampel’s legal expenses. Strampel has been sued by girls and women who were sexually assaulted by Nassar.

The school also said Suresh Mukherji, chairman of the Department of Radiology and chief medical officer of the MSU HealthTeam, has been suspended.

Mukherji also was interviewed in March as part of an investigation into restrictions that were supposed to have been put on Nassar.

He said then that he had been in the chain of command between Strampel and Nassar, but Strampel and another doctor did most of the day-to-day supervision and decision-making related to MSU Sports Medicine.

Recently, a special counsel appointed by Michigan Attorney General Bill Schuette asked Michigan State for Strampel’s work computer, his work cellphone and his work calendars. They also requested “all records” of any university investigation into the Nassar matter, including a review conducted by former Chicago federal prosecutor Patrick Fitzgerald.

He was hired by the school and has said no one there knew that Nassar committed crimes.