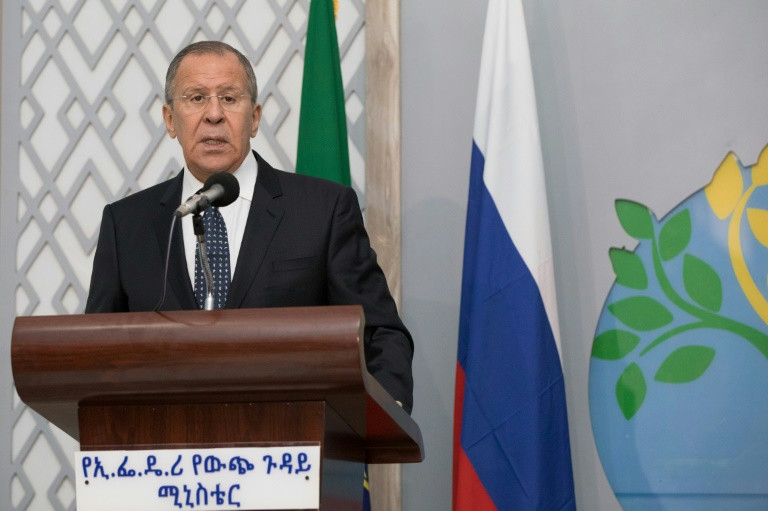 Russian Foreign Minister Serge Lavrov says Britain should have sent Moscow an official request about the substance used to poison a former double agent and demanded Moscow be given access to the nerve agent (Photo: AFP)

Russia on Tuesday slammed Britain's accusations of involvement in the poisoning of a former double agent as an attempt to discredit Moscow and demanded that London give it access to the nerve agent.

The Russian foreign ministry summoned the British ambassador to a meeting in Moscow over remarks by British Prime Minister Theresa May that it was likely Russia was behind the poisoning and that London would consider ways of retaliating.

"Any threats of sanction measures against Russia will not be left without a response," it said.

Russian Foreign Minister Sergei Lavrov added that Britain should have sent Moscow an official request about the substance used on its soil.

Lavrov demanded to be given access to the substance used to poison former double agent Sergei Skripal and his daughter Yulia on March 4, which May said was a powerful nerve agent called "Novichok" developed by the Soviet government.

"Through an official note we had demanded access to this substance," Lavrov said, adding that Russia also asked to be informed about the investigation. "Our requests have been denied."

He insisted that Moscow was not to blame for the poisoning of the former agent and was ready to cooperate with London.

"Russia is not guilty. Russia is ready to cooperate according to the Chemical Weapons Convention, if Britain takes the trouble and condescends to carry out its international obligations according to the same document," Lavrov told a press conference.

Russian parliament speaker Vyacheslav Volodin went as far as to say that the poisoning scandal was a planned attempt to meddle in Sunday's presidential election.

"This is a planned action that is a form of influence on the campaign," he was quoted by Russian agencies as saying. "This is meddling in our business, our elections."

Britain's ambassador to The Hague Peter Wilson said London expected Russia to make a declaration to the chemical weapons watchdog OPCW (Organisation for Prohibition of Chemical Weapons) about how the nerve agent came to be used in Britain.

"What we want for the Russians today is to come clean about their chemical weapons programme," he told journalists.

Moscow's representative at the OPCW, Alexander Shulgin, said that London should "stop building up hysteria" and declared the ultimatum to provide information by the end of Tuesday "absolutely unacceptable."

"We will demand material proof of the alleged 'Russian trace' in this high-profile case," he said at The Hague, according to a foreign ministry statement.