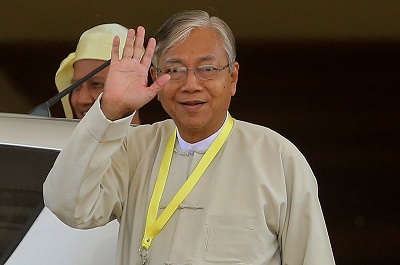 Myanmar President U Htin Kyaw on Monday urged the Myanmar people to work with the government "with full force and enthusiasm" in building a peaceful, prosperous and developed country.
In his message for the new year 2018, U Htin Kyaw recalled that since taking office, the government has been working hard to achieve internal peace, national reconciliation, building a democratic federal republic, and improving the socio-economic life of the people.
Due to the efforts, the country is able to achieve a certain degree of success, he said.
At this time when the 21st Century Panglong Peace Conference are being busily prepared for building a democratic federal republic, the president said the government, the people, the parliament, the armed forces, political parties, civil society organizations and ethnic armed organizations have been working very hard to jointly realize the goal.
He wished that all will be fulfilled in the new year, praying for the health and happiness of the Myanmar people, brothers and sisters of the ethnic nationalities.
On the same day, two Vice Presidents U Myint Swe and U Henry Van Thio also sent new year greetings, hoping that the country and the people will be able to achieve peace and development soon.