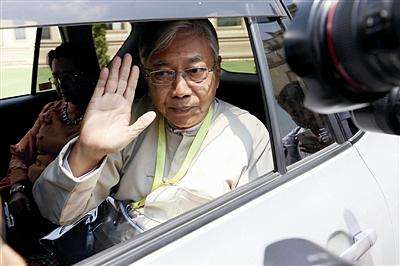 "Myanmar President U Htin Kyaw resigned on March 21, 2018," a statement on the president's official Facebook page said, adding that a new leader would be selected "within seven working days".

Myanmar's First Vice President U Myint Swe will serve as acting president according to the constitution until the parliament re-elects the new president, U Zaw Htay, director-general of the President Office, told Xinhua on Wednesday following U Htin Kyaw's resignation.

Under the constitution, the presidential vacancy will be filled within seven days through the parliament.

The President's Office earlier on Wednesday released an official statement of President U Htin Kyaw's resignation, citing health as the reason.

U Zaw Htay added that the resigned president U Htin Kyaw underwent medical treatment in Singapore in January and insisted on his resignation.

U Htin Kyaw, 72, was elected as the president in March, 2016, after Aung San Suu Kyi's National League for Democracy (NLD) won the 2015 general election.