HEADLINE N. Korea 'in talks to free US detainees' as diplomacy escalates

N. Korea 'in talks to free US detainees' as diplomacy escalates 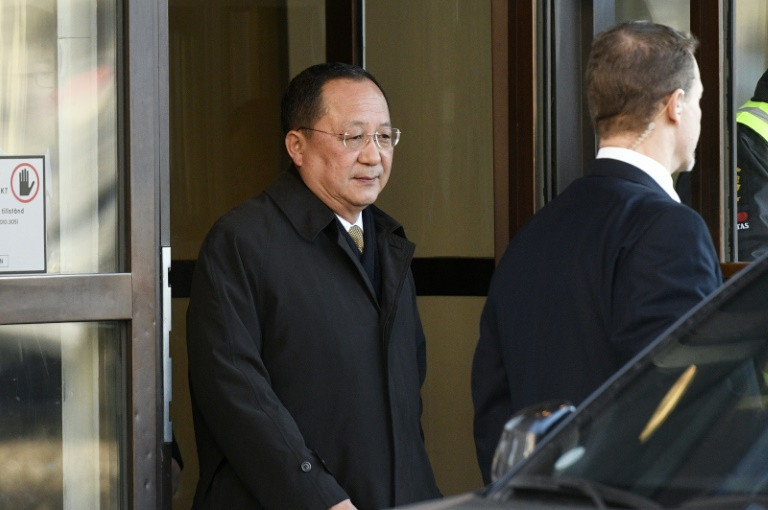 North Korean Foreign Minister Ri Yong Ho leaves a Swedish goverment building in Stockholm on March 16, where the issue of three Americans held in the North was raised, according to reports (Photo: AFP)

North Korea is in talks with the US and Sweden to release three jailed Americans, reports said, as diplomatic activities intensified ahead of Pyongyang's planned summits with Washington and Seoul.

The release of the three Korean-Americans is under discussion through multiple channels more than a week after President Donald Trump agreed to meet the North's Kim Jong Un, the reports said.

Pyongyang has yet to confirm it even made the US summit offer -- relayed by Seoul envoys who had met Kim in Pyongyang -- but South Korea said he had "given his word" about his commitment to denuclearisation.

Trump's stunning announcement has triggered a race to set a credible agenda for what would be historic talks between the two leaders.

Seoul-based MBC TV station reported Sunday that Pyongyang and Washington had "practically reached" a final agreement on the release of US citizens Kim Hak-song, Kim Sang-duk and Kim Dong-chul.

"They are hammering out details over the timing of the release," it quoted a South Korean diplomatic source as saying.

The negotiation was held through the North's mission to the United Nations and the US State Department -- an unofficial avenue of communication dubbed the "New York channel", the source said.

Sweden represents Washington's interests in the North. It raised the issue of American detainees to "move things in the right direction", CNN quoted one source as saying.

Kim Dong-chul, a South Korea-born American pastor, has been detained by the North since 2015 when he was arrested for spying. He was sentenced to 10 years' hard labour in 2016.

Kim Hak-song and Kim Sang-duk -- or Tony Kim -- were both working at the Pyongyang University of Science and Technology, founded by evangelical Christians from overseas, when they were detained last year on suspicion of "hostile acts".

Reports of their possible release come amid a flurry of diplomatic activities involving Pyongyang and Washington along with Seoul and other US allies.

During a visit to Pyongyang by Seoul's envoys earlier this month, Kim reportedly offered to meet Trump, with the US president subsequently agreeing to talks by May. No specific time or venue has been set.

Kim also agreed to hold a summit with South Korean President Moon Jae-in next month -- the third ever between the two Koreas -- according to the envoys. And he reportedly offered to consider abandoning his nuclear weapons in exchange for US security guarantees.

South Korean Foreign Minister Kang Kyung-wha said in an interview aired Sunday that Kim was "taking stock" after Trump's surprise decision to accept the invitation, but that a channel of communication had been established.

She said Kim had "given his word" on his commitment to denuclearisation.

"But the significance of his word is quite, quite weighty in the sense that this is the first time that the words came directly from the North Korean supreme leader himself, and that has never been done before," Kang told CBS's "Face the Nation".

Nothing has been offered to the North Koreans to engage in negotiations, she said.

The Stockholm talks overlapped with another meeting between the national security advisers of the US, South Korea and Japan.

They agreed that peace on the Korean peninsula hinges on the success of the two planned summits, vowing "not to repeat the failure of the past", it said in an apparent reference to previous botched nuclear disarmament negotiations with the North.

Also on Sunday a senior North Korean diplomat arrived in Finland for talks on peninsula issues with former officials and academics from the US and South Korea.