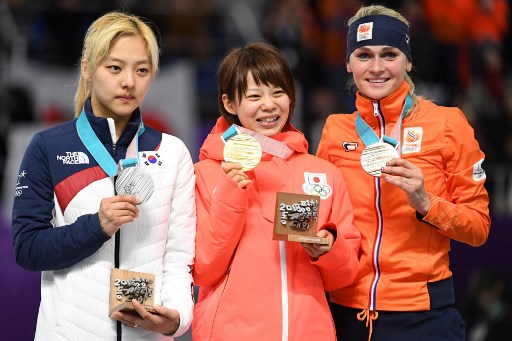 Nana Takagi of Japan made history by becoming the first athlete to win the newest event of mass start in the speed skating competition at the PyeongChang Olympics here on Saturday.

Takagi, gold medalist in the team pursuit event at the Games, increased the pace heading into the final lap to pull away from the rest of the field.

The 25-year-old, silver medalist in the 2017 world championships, maintained the gap to finish with 60 points ahead of world champion Kim Bo-Reum of South Korea, who took silver with 40 points. Irene Schouten of Netherlands clinched the bronze with 20 points.

"I focus on team pursuit and mass start, and I got two gold medals. That's unbelievable," Takagi added.

Takagi, 25, also became the first woman from Japan to win two gold medals in any sport at the Winter Olympics.

"I will treasure this medal forever. Ever since when I started at 14, I wanted to get a medal and I am very happy to get this medal for my country," Kim said.

Later in the men's mass start, the 2016 world champion Lee Seung-Hoon of South Korea claimed the gold with 60 points, edging out Bar Swings of Belgium and Koen Verweij of Netherlands in the final sprint.

Lee, a former short track speed skater, believed the short track skills helped him and a skater in the mass start race also need other tactics.

"As the first mass start, I feel very happy to do this in front of my home crowd and I am honored to get so much praise with this medal." Lee said.

"I think my family will be feeling the same. They may have been more nervous than me."

"It has been a long Olympic Games, the last race. After the semifinal I felt very easy in the final," Swings said.

Mass start has been introduced to the Olympics for both men and women. Unlike traditional speed skating events, athletes wear helmets for the 16-lap contest which includes intermediate sprints after four, eight and 12 laps as well as a sprint finish, the skaters racing each other instead of against the clock.