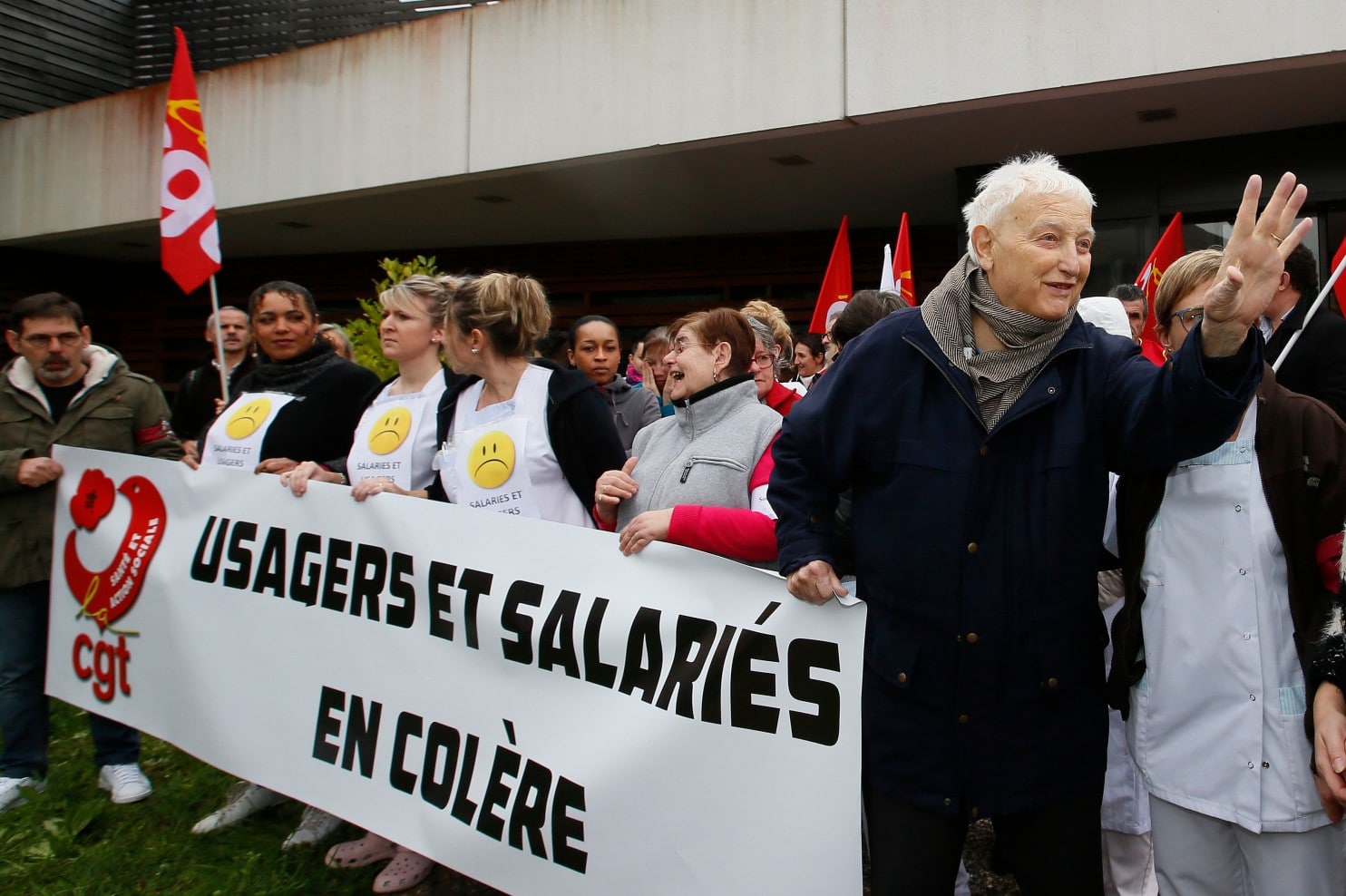 A resident of the Maharin nursing home of Anglet, Southwestern France, protests with care workers on January 30, 2018. Photo: AP
Paris (People's Daily) - Nursing home workers in France rallied today across the country, citing a lack of funding and poor working conditions, among many other concerns, as the quality of elderly care continues to crumble.
In cities like Paris, Bordeaux, Nantes, Lyon, and Strasbourg, nursing home employees were in union over issues that the government continues to ignore.
Prior to today’s strike, the movement had already collected 400,000 signatures and mobilized tens of thousands of employees from the public and private nursing home sectors.
The strike received support from other unions, including the Association of Directors for the Service of the Elderly (AD-PA). 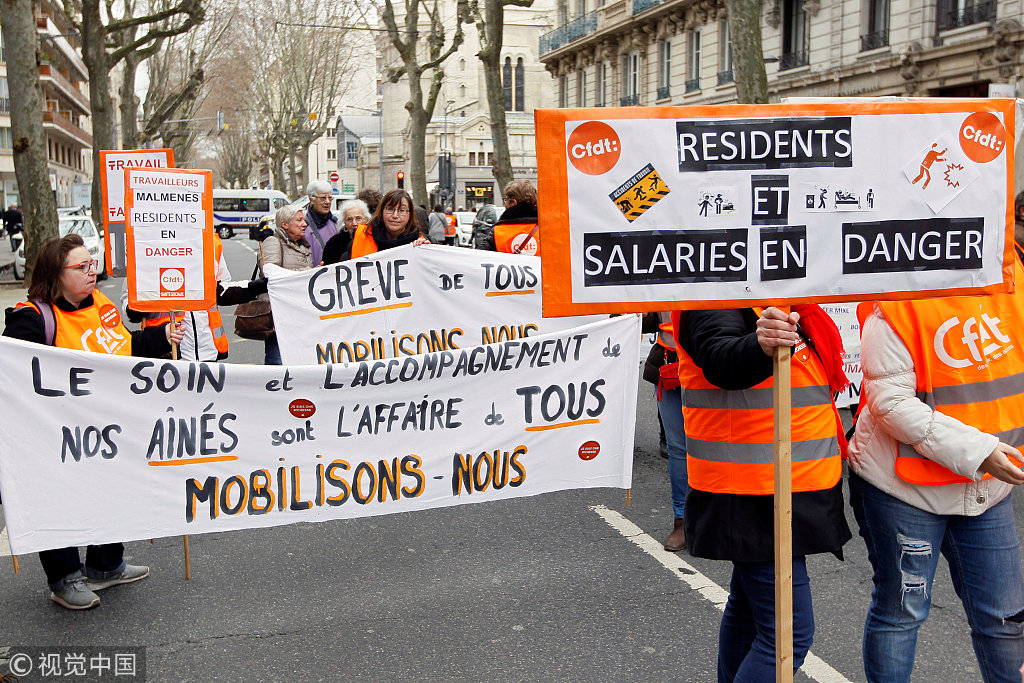 Nurses and staff of retirement homes and residential care facilities take part in a nationwide strike and protests, asking for more means to take care of the poorest elders. (Photo: VCG)

One issue has to do with how French tariff reforms from 2017 won’t align the public and private elderly care sectors until 2023.
The Hospital Federation of France felt the new budget calculations would create a 200 million euro loss over the course seven years and force public institutions to lower their number of employees.
Deemed untenable from the outset, the movement claims a rate of one agent for each resident against an average of less than 0.6 today.
Furthermore, the Great Age Solidarity Plan for 2007-2012 recommended 0.65 caregivers for a resident and up to one-on-one one for those in need of high dependence.
A third of France’s care provider institutions lack a coordinating physician, thus failing to comply with current regulations.
Staff shortages not only hurt the well-being of the elderly, but also cause a surge in budget expenses for Ehpad, which sends their residents to the hospital in times of emergency.
Work-related accidents

Another issue is how the elderly care sector in France has experienced an increase in work-related accidents and is the only work sector to do so.
Accidents at work and occupational disease stand at a troublesome 9.4 percent. In the construction industry, it is 6 percent. 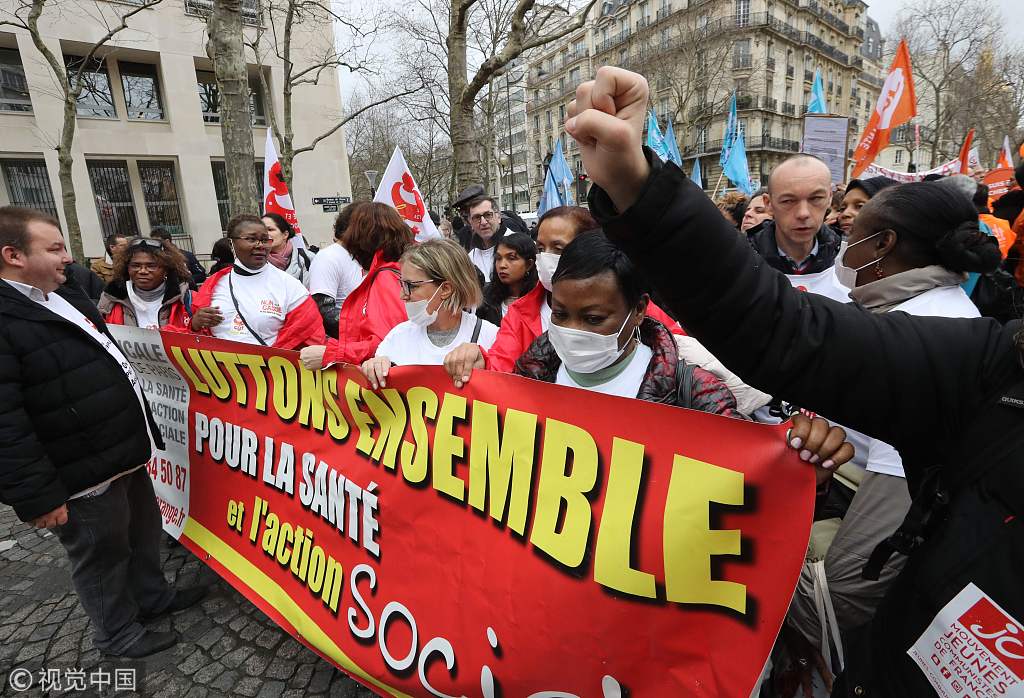 France’s Health Insurance industry considers the situation alarming, especially when accidents and occupational disease climb 2 percent in one year and 45 percent in a decade.
“The work comes with a high level of tension and can be the source of significant health deterioration,” said a health insurance spokesperson, and added, “At Ephand, we call it ‘institutional abuse.’

Contrary to issues surrounding staff shortages, the majority of those in need of care are getting older.
Last July, the Directorate of Research, Studies, Evaluation and Statistics (Drees) released a report that found at least half of those who needed care were 87-years old at the end of 2015, up a full year from 2011.
As people get older, they become more dependent. In 2015, 83 percent were no longer independent, compared to 81 percent five years earlier.
“The increase in dependency from elderly residents at Ehpad has created heavier workloads, making work conditions particularly worrying for caregivers, both physically and psychologically," said the report.

A lack of funding

Last but not least, by 2060 the French are expected to live seven years longer, which would increase tension for both nursing homes and public finance.
A third of France’s population will be over the age of 60, while today the same age demographic is roughly 25 percent.
Funds needed to care for the elderly could double as a share of GDP from 1.4 percent to 2.78 percent, according to the Drees report.
Agnès Buzyn, French Minister of Solidarity and Health pledged that the tariff reform would have “no losers,” and that there would be “no post cuts.”
Last week Buzyn announced that in addition to the 100 million euros already planned for the 2018 budget, 50 million euros would be dedicated to elderly care services. But her promise failed to ease industry tension.
Analysts have said that out of the 728,000 elderly, 10 percent are over 75 years of age, while a third are over the age of 90. Of the 7,200 elderly living at Ehpad, and 400,000 work there.
For months, even years, professionals in have been alerting authorities about the work and living conditions at the nursing homes, which have considerably deteriorated.
AD-PA Chairman Pascal Champvert said today's strike was “the very first one because it involved all unions,” and later added,  “The indignations found at Ehpad and within home care services have been increasing for years, and today the system is running out.”
This is not the first time France’s nursing home workers have gone on strike due to poor working conditions and employee shortages.
Last year, hundreds of strikes hit nursing homes all over the country. One strike, in Opalines located along the Eastern Jura department lasted three months.