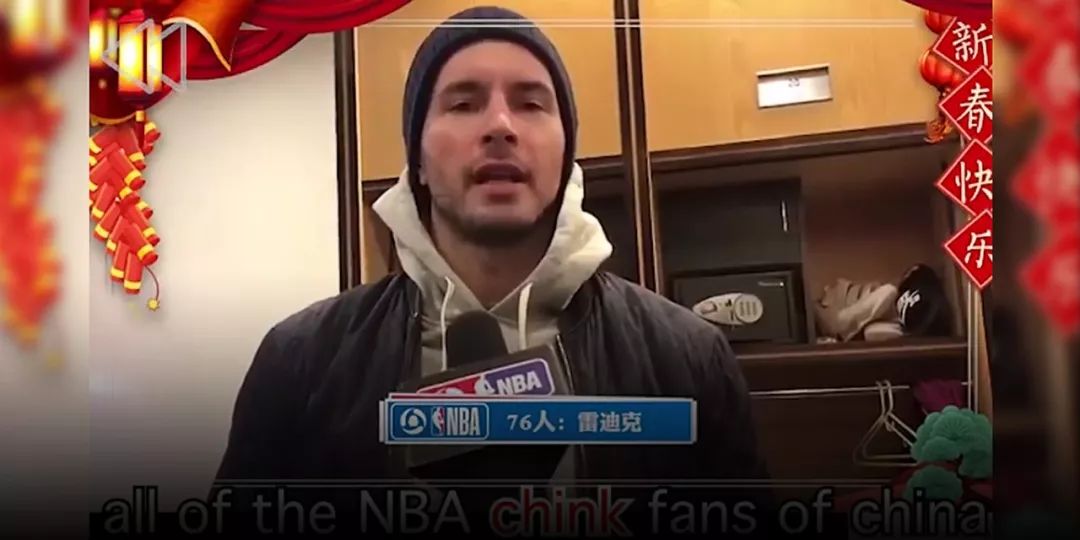 NBA player J.J. Redick has denied using a racial slur in a Chinese New Year’s greetings video that sparked outrage online.
In the video, a compilation of NBA stars wishing NBA fans a happy Year of the Dog, which started Friday, Redick appears to say “I wish all of the NBA chink fans of China very happy Chinese New Year.”
“I want to sincerely apologize to anyone I may have offended,” Redick wrote on Twitter Monday. He explained that he changed what he wanted say mid-sentence and that “it came out the wrong way.” Redick, who plays for the Philadelphia 76ers, said in an earlier tweet that he had been “tongue tied.”
But that explanation did not assuage all Chinese fans. “He is still trying to escape responsibility,” Lu Yongliang, a 22-year-old student in Beijing, told Sixth Tone. Lu, who describes himself as a years-long NBA fan, called on the league to also publicly respond on the issue, “because racial discrimination is really a very serious crime in America.”
Though many users of Weibo, a microblog platform, accepted Redick’s apology, others were less forgiving. “You apologized out of money, I refuse to forgive you out of dignity,” wrote one user.
The offending video was produced by Tencent, the Chinese tech company that broadcasts NBA games in China, and was shown during a game on Wednesday, according to sports outlet ESPN.
A Weibo user’s post on Sunday brought Redick’s apparent slur wider attention. In a video that a day later had been viewed more than 15 million times, he wonders how it could be that such a video was made, edited, and uploaded without anyone noticing the remark.
Fellow NBA player Jeremy Lin, an American whose parents emigrated from Taiwan and who enjoys a large following in China, wrote on Weibo on Monday that he had spoken with Redick and believed that he had no racist intentions.
An editor at ESPN was fired in 2012 for the headline “Chink in the Armor” atop a story about Lin, who has frequently spoken out about racial profiling and discrimination he has faced in the NBA and during his years playing in college.
Peng Nanen, a 21-year-old student in Huzhou, eastern China, told Sixth Tone he thought Redick’s remark was unintentional: “He’s a public figure after all.” The reactions, Peng said, were “a little excessive.”
China is the NBA’s second largest market, and players routinely visit the country to promote their personal brands and play exhibition games.
Argentinian soccer player Ezequiel Lavezzi apologized to Chinese fans last year after he posed with a “slant-eyes” gesture during a photo shoot. Earlier this week, a commentator for Australian TV caused controversy after she said Chinese skiers competing at the 2018 Pyeongchang Winter Olympics “all look the same.” She later explained that she meant the athletes’ techniques were similar.
Chinese state broadcaster CCTV has also been called out for racism this week, after it broadcast a blackface skit to an estimated audience of 700 million in its annual Spring Festival gala on Thursday. Viewers, too, wondered aloud how the racist implications had escaped the notice of the mammoth production team behind the program, who as yet have not apologized.