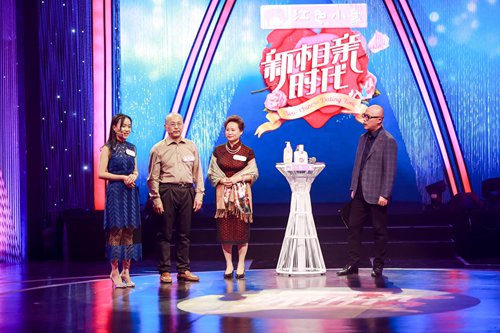 Chinese dating shows which feature groups of men or women competing, via shows of talent and war of words majorly, for potential lovers such as If You Are the One can be entertaining to watch, but what happens when parents get involved in the action?

Well the answer seems to be that you become a new ratings success as New Chinese Dating Time, a TV dating competition that has parents choose potential spouses for their children, has topped the national TV ratings in China for the past three weeks in a row since it debuted on Jiangsu Satellite Television in late March.

During the show, a potential candidate takes the stage and answers questions from six groups of parents whose children watch the proceedings on a screen in another detached room. While the children can call their parents by phone to talk about what they think of the current candidate, the choice of whether to arrange for a date is ultimately up to the parents.

If a parent isn't satisfied with the current candidate, they can "opt out" of the round with a press of a button, leaving the other parents to continue to fight over him or her. The round continues until three or fewer groups of parents remain at which point the children are "released" from their room so that they can talk to the candidate face-to-face.

The candidate's parents are then also invited to the stage to voice their opinion. The round will finally come to an end when the candidate and one of the children finally agree to go on a date.

When parents and their children are in tune about a candidate, things usually go off without a hitch. However, when parents stop listening to their kids and start making decisions on their own, this can lead to some embarrassing moments.

In the show's first episode, a father chose a 52-year-old man for his 32-year-old daughter even though she kept telling her parents that she felt the candidate was too old for her. Although she finally agreed to a date with the older gentleman, she wore a smile of embarrassment throughout the entire segment.

"It's interesting to see the collisions of values between parents and children… The process by which how a candidate chooses their ideal mate based on the limited information available and their own self judgment also appeals to me," posted netizen Lienafox on Sina Weibo.

Vowing to showcase "the reality of the marriage market in Chinese society today," the weekly show is hosted by Meng Fei, the host of the 8-year-old dating show If You Are the One .

Similar dating shows that get parents involved that debuted in December 2017 have also captured the public's attention.

Different from If You Are the One, which aims to give contestants a chance to start a new romance, New Chinese Dating Time is specifically targeting those who are looking to get married, Meng explained during the show's first episode.

With China currently home to more than 200 million singles of marriageable age (men over 22 and women over 20), xiangqin, or blind dating, still remains one of the most popular ways for Chinese singles to meet potential mates. According to a China Youth Daily survey from 2017, around 82 percent of single men and women living in first-tier cities in China have been on a blind date.

Blind dating in China isn't just limited to singles; many worried parents are also getting involved.

According to Chinese media reports, in 2017 many anxious Chinese parents flocked to "dating corners," areas in public parks where parents can shop around for future son- or daughter-in-laws by exchanging their children's personal information with other parents.

"While hosting If You Are the One, many parents came to me and said they wanted to join their children on stage. This is the main reason why we started New Chinese Dating Time," Meng explained in an interview with entertainment portal ent.163.com.

"I think the show does showcase the fact that many parents of single men and women today are getting increasingly anxious about their children getting married. I also felt under a lot of pressure back when my parents constantly pushed me to find a fiancée," Xiao Ting, a 28-year-old single woman living in Beijing and a fan of the show, told the Global Times.

"For me, my parents' opinions about my future spouse are vitally important and can sometimes be the deciding factor concerning who I date."

Even though the age of arranged marriages in China is long gone, Chinese parents still play an important part in their children's search for a partner partly due to the influence of the traditional patriarchal system and the values of filial piety.

The fact that "being filial to one's parents" has been one of the most mentioned criteria for future spouses on New Chinese Dating Time shows just how big an influence tradition still has.

On the show, parents' requirements for their children's ideal spouses are often bluntly realistic and materialistic.

While trying to entice some of the more popular candidates, several mothers from well-off families immediately promised that they would pay for the new couple's house if they got married.

"I will go for someone I love rather than just marry someone for a house, which I can earn with him together," commented one netizen in a post on streaming platform Youku.

In another episode, when the parents of a male candidate hear from one of the mothers that her daughter is a bit lazy and not good at household chores, they immediately refuse to consider her.

"What's the problem? She's not getting married to become your servant!" posted another netizen on Youku.

Not all parents have taken a conservative approach, however.

One mom in the above episode encouraged her potential daughter-in-law to pursue her own career rather than stay at home, telling the female candidate to "leave all the household chores to me and go pursue your career," which won numerous thumbs-up from netizens.

"I see in this show that more and more parents are willing to change for their children when it comes to the issue of marriage," posted netizen Wendy Huakaiwuguo on Sina Weibo.