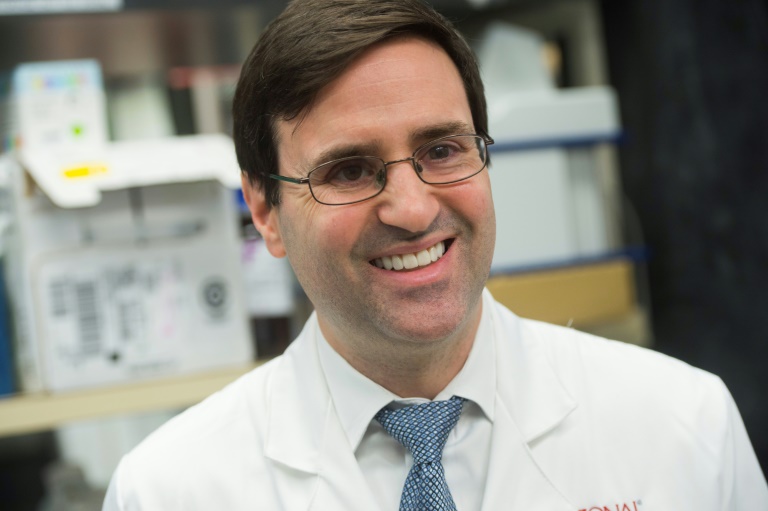 Christian Hinrichs, who leads experimental trials at the US National Cancer Institute, is himself a cancer survivor. (File Photo)

Her cervical cancer was spreading fast. Multiple rounds of chemotherapy, radiation and surgery had all failed. Tumors were invading her liver and colon, and squeezing her ureters.

Her last chance was to enroll in an experimental trial in which doctors were trying to partially replace patients' immune systems with T-cells that would specifically attack cancers caused by the human papillomavirus (HPV), a common sexually transmitted infection.

Within a few months, her tumors completely disappeared.

This March, she celebrated five years cancer-free and according to her doctors appears to be fully cured.

"One of the biggest rewards is being a source of hope, and being an ear for other people," said Scott, who works as a realtor in Washington and advocates for cancer patients in her free time.

The trial at the National Institutes of Health Clinical Center, a US government-funded research hospital, was a breakthrough because it offered the first evidence that immunotherapy, which has already seen some success in blood cancers and melanoma, could work against cervical cancer.

A closer examination of why Scott's cells worked so well has also led to a new discovery that may be helpful in killing other kinds of solid tumors.

Lead investigator Christian Hinrichs of the National Cancer Institute told Scott the news at her follow-up visit to the NIH in February.

"Straight out of you, we got that gene sequence and now we can put it in anyone's cells and make their cells attack cancer the same way," he said.

"So that is something we are working on, trying to bring it to the clinic to see if it will work."

The trial was unusual in another way, too. Hinrichs, 46, is a cancer survivor himself.

He had an ocular melanoma, a rare kind of cancer that affects six in every one million people.

The small, cancerous spot was discovered in his right eye when he was in his late 20s, then a young cancer surgeon at the start of a promising career.

He underwent nearly a dozen radiation and laser treatments, each time believing the cancer was gone. But it always came back.

Finally, the only choice was to remove the affected eye, a surgery he underwent in 2005.

"Having experienced cancer and having worried about it coming back influences how you do research," Hinrichs told AFP.

"I really wanted treatments where if the cancer came back, we would have a solution to that problem."

A person's immune system will naturally try to kill off any invader, including cancer, but usually falls short because tumors can mutate, hide, or simply overpower the white blood cells that lead the attack, known as T-cells.

Immunotherapies that have seen widespread success, such as chimeric antigen receptor (CAR-T) cell therapies, mainly target blood cancers like lymphoma, myeloma and leukemia, which have a tumor antigen -- like a flag or a signal -- on the surface of the cells so it is easy for immune cells to find and target the harmful cells.

But many common cancers lack this clear, surface signal.

Hinrichs' approach focuses on HPV tumors because they contain viral antigens that the immune system can easily recognize.

"What is very appealing about this cancer is the virus is right in the cancer," explained Miriam Merad, professor of oncological science at the Icahn School of Medicine at Mount Sinai in New York.

Merad, who is not involved with Hinrichs' work, described his approach as "very clever" and "absolutely critical" to unlocking the mystery of why some people respond to immunotherapy and others do not.

In Scott's trial, the strategy was to surgically remove one of her tumors, and isolate the T-cells that were already trying to attack it.

Researchers took these tumor-infiltrating lymphocytes (TILs) and grew billions of them to re-infuse in her blood, creating an army of immune fighters.

Besides Scott, it worked for one other patient, Aricca Wallace, now a 41-year-old mother of two teenage boys in Kansas City, Missouri and also considered fully cured after five years.

But the approach failed for the other 16 women in the trial.

To explore what had worked and why, Hinrichs took another look at the cells that were infused in Scott and Wallace.

He found they indeed were targeting HPV. But in Wallace, most of the T-cells were intent on destroying abnormal proteins that were unique to her tumor.

And in Scott, about two-thirds of the cells that cleared away her cancer were all targeting another tumor signal, a protein called KK-LC-1.

This protein is also expressed in cancers that currently affect about a half million people worldwide, including some triple negative breast cancers -- one of the most stubborn and lethal forms of breast cancer -- certain stomach cancers, non-small cell lung cancers and cervical cancers.

The researchers had found a new target.

"It was quite surprising," said Hinrichs.

"It is an example of where the science led us somewhere different than where we thought it might go."

Hinrichs' lab hopes to open the first clinical trials on cancers that express KK-LC-1 in about a year. International patients are welcome to apply.

Researchers cannot say how often these experimental trials work or give a percentage rate for success. The study sizes are just too small.

"He represents one of the more unusual options and at the same time, an option that may truly be able to help the patients."

For Scott, learning that her cells could lead to other cures in the future was what she described as a "full-circle" moment.

"There is something innate in me that is going to help others? That is pretty exciting."