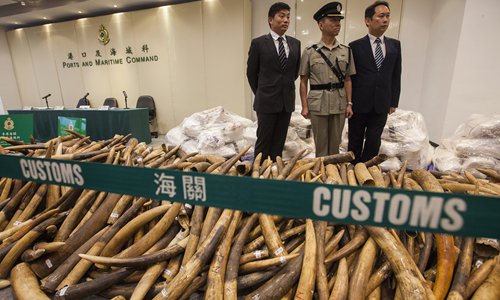 Officials stand next to 7,200 kilos of seized ivory displayed at a Hong Kong Customs and Excise press briefing in July. Photo: IC

When tour guide Xiao Zeng bought his friend a watch and brought it into China from abroad, he never expected to end up in court for it.But that's exactly what happened in November 2015, when Xiao Zeng led a tour group to Europe. During the trip, he received a phone call from his colleague, who asked him to purchase a watch from a shop in Switzerland for his company's general manager. On November 17, Xiao Zeng arrived at Beijing Capital International Airport but did not declare anything at customs. When officials inspected his luggage, they found the luxury-brand watch and demanded that he pay 150,000 yuan ($22,873) in tax. Xiao Zeng was charged with smuggling general goods. Although he was eventually spared punishment because he confessed and did not profit from the act, the watch was confiscated by the court. Xiao Zeng's case is not isolated. Court insiders said that in recent years, there have been frequent cases of tour guides being arrested for smuggling, as it has become a new tactic for bringing goods illicitly into China. Moreover, a recent white paper outlined the emergence of other new methods, despite ongoing efforts by China to combat smuggling. New tacticsAccording to the White Paper on the Trial of Criminal Cases of Smuggling sent to the Global Times by Beijing No. 4 Intermediate People's Court on Tuesday, out of 51 cases that the court has reviewed from 2015 to September this year, one third involved endangered animals and their products, while 13 were cases of smuggling general goods. Smugglers are using new tactics to bypass inspection, including covering endangered animal products such as ivory, rhinoceros horn, pangolin scale and brown bear bile with tinfoil and hiding them in wine boxes, milk cans, and thermos bottles. Some were found to have refitted their luggage cases and hidden products in compartments covered by an iron plate. Other smugglers have even bound ivory to their bodies and tried to disguise the fact by wearing thick clothing. The report showed that most suspects in drug smuggling cases were foreigners who had tried to hide the drugs on or inside their bodies. Of the nine cases, seven of the defendants were from Africa. Some of them had concealed drugs in the soles of their shoes or near their private parts. China has intensified its crackdown on smuggling in recent years. According to the General Administration of Customs, officials handled 2,773 cases in the first 10 months of this year, of which 233 criminal cases involved arms and ammunition, 474 involved drugs, and 86 were related to endangered species, the Xinhua News Agency reported in November.Animals targetedThe White Paper also highlighted the continuing serious situation regarding the smuggling of endangered animals and their products, especially ivory. It found that most of the smugglers were above 40 years old, poorly educated with no stable source of income and had gone abroad to make a living. The smugglers confessed that they usually purchased endangered animal products from local black markets with the intention of selling them in China. Some had bought the products as gifts for family and friends, while others even thought that if they were discovered, they would only have their products confiscated and not face criminal charges. Previous reports showed customs authorities in South China's Guangxi Zhuang Autonomous Region have confiscated more than 360 kilograms of ivory smuggled from Africa. Three people were arrested by Shanghai customs on December 10 on suspicion of illegally trafficking 3.1 tons of pangolin scales, the largest amount ever seized in China."What the white paper and media said is just the tip of the iceberg. Most killings in remote areas remain unknown and hunters always manage to evade government regulations," Sun Quanhui, a senior scientific advisor at the international NGO World Animal Protection, told the Global Times. "The smuggling of endangered animals has been running rampant because many people are still convinced that wild animals are valuable for meat, medicine and collections. "At the same time, rare and endangered animal products are also seen as a sign of social status," Sun noted, adding that as long as there is a legal market for it, the smuggling of endangered animals and their products will continue to exist. The White Paper also showed that while 57.14 percent of all smuggling cases in 2015 involved endangered animals and their products, this had dropped to 40 percent in 2017, which Sun attributed to enhanced law enforcement in recent years.However, "it does not necessarily mean that the killings have dropped. It might be on account of the decline of the number of endangered animals and new and improved methods of concealment," said Sun.