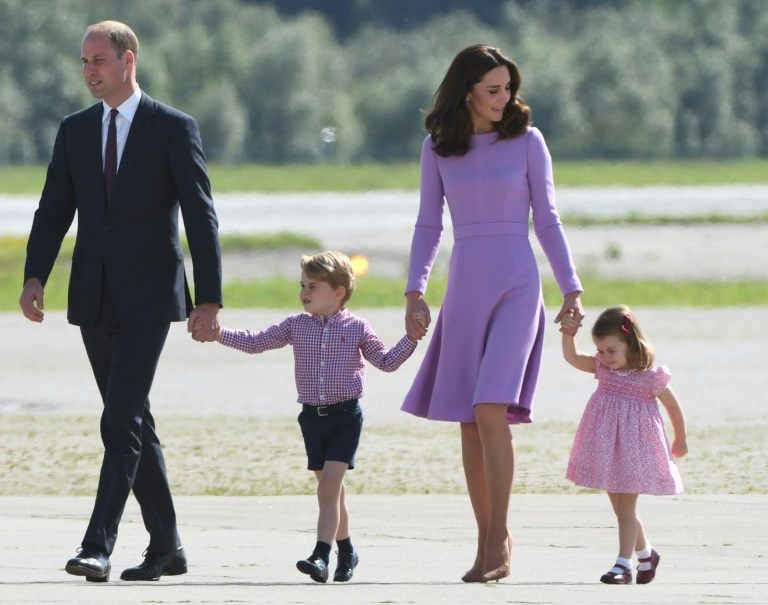 Kate was admitted to St. Mary's Hospital in central London, where George, four, and two-year-old Charlotte were born.(Photo: AFP)

Kate, the wife of Prince William, gave birth to a baby son on Monday, the couple's third child who is fifth in line to the British throne.

Mother and baby are both doing well, the palace said, and William, the Duke of Cambridge, was present for the birth.

The baby is the couple's third child, after Prince George and Princess Charlotte.

Queen Elizabeth II, William's father Prince Charles, and his brother Prince Harry were said to be delighted with the news.

"Her Royal Highness The Duchess of Cambridge was safely delivered of a son at 11:01 hours," the palace announced in its brief statement.

Kate, 36, was admitted early Monday to the private Lindo Wing of St. Mary's Hospital in central London, where four-year-old George, and Charlotte, aged two, were born. 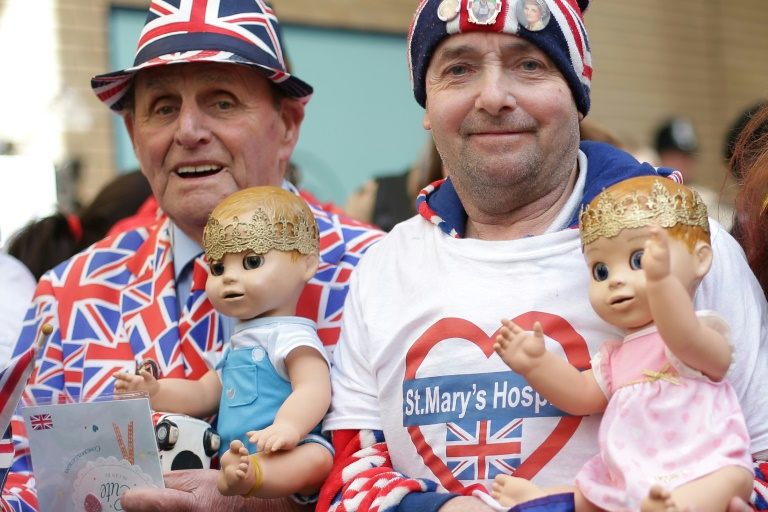 Royal fanatics have been camped outside the hospital wing, where the Duchess of Cambridge is giving birth, for several days in anticipation.(Photo: AFP)

Royal fanatics, who had been camped outside the hospital wing for several days in anticipation, jumped for joy and popped open champagne.

"We're going to celebrate with fish and chips!" said John Loughrey, who was wearing a Union Jack hat and clutching a plastic doll with a crown.

Maria Scott, 46, a housewife from Newcastle in northeast England, has been in place for 15 days.

"It's really important to show support because they need to know how much they are loved by the people," she told AFP.

"We're very proud of our monarchy."

Tony Appleton, a town-crier dressed in a flamboyant red uniform, announced the news from the steps of the hospital's Lindo Wing to a crowd of supporters and media. 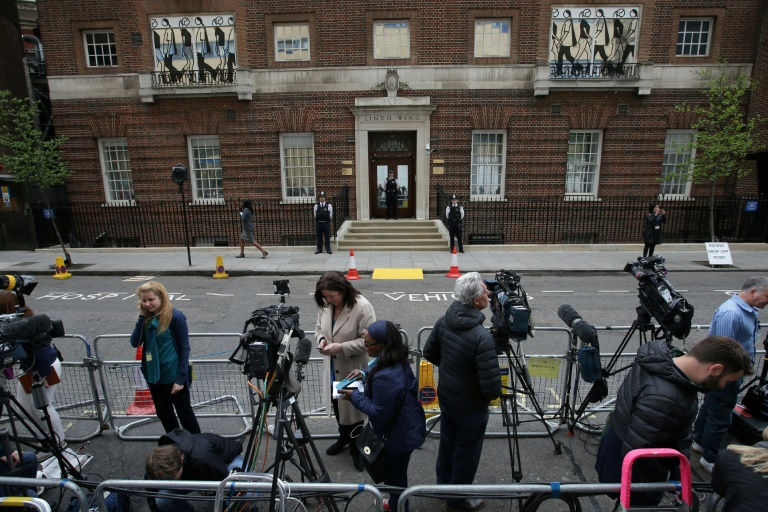 Journalists also camped outside the hospital waiting to find out whether the new addition to the British royal family is a girl or a boy.(Photo: AFP)

The baby boy is a sixth great-grandchild for Queen Elizabeth, who turned 92 on Saturday, and her husband Prince Philip.

It will hold the title of prince after Queen Elizabeth changed the rules in 2012 to ensure that all of William's children would be entitled to the style, not just his eldest son.

As with their two previous children, the royal couple did not know whether the baby was going to be a boy or a girl.

Bookmakers have Arthur, Albert, Frederick, James and Philip as their favourites for the young prince's name.

The boy does not overtake Charlotte in the line of succession due to new laws agreed across the 16 Commonwealth realms where Queen Elizabeth is the head of state, including Canada, Australia and New Zealand. 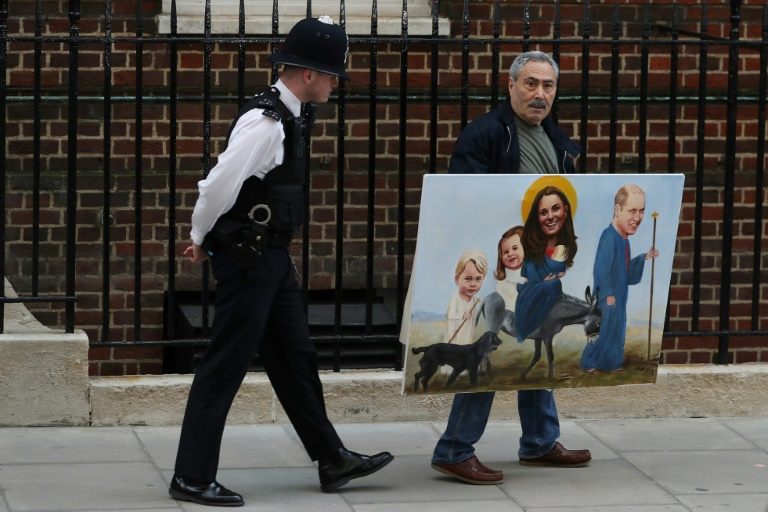 Political artist Kaya Mar (R) arrives outside the private Lindo Wing of St Mary's Hospital with a painting depicting Prince William, his wife Kate and their children in a religious context.(Photo: AFP)

Under the law, designed to end male primogeniture for William's children, boys born after October 28, 2011 cannot overtake their elder sisters.

They were part of the trusted team who also delivered George and Charlotte.

The duchess suffered severe morning sickness during all three pregnancies. 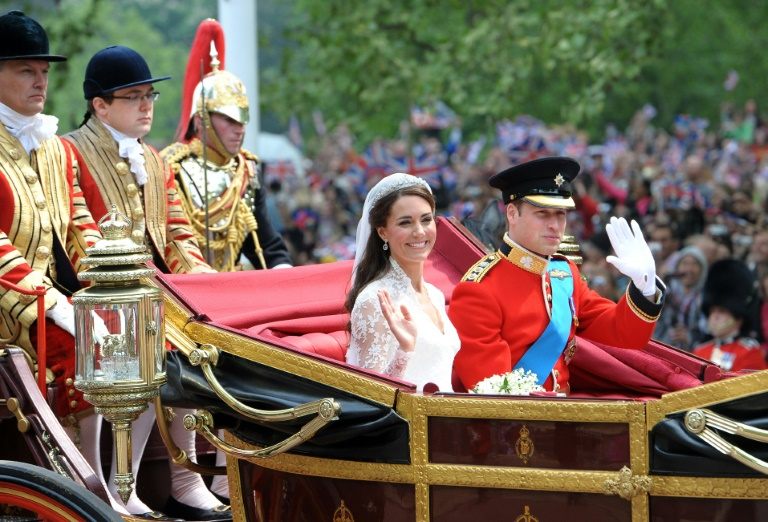 William and Kate were married at Westminster Abbey in London on April 29, 2011.(Photo: AFP)

William, who is destined to become king after Charles, and Kate met at St. Andrews University in Scotland.

They tied the knot at Westminster Abbey in London on April 29, 2011, in a ceremony watched by up to two billion people worldwide. The marriage helped breathe new life into Britain's monarchy after years of crisis.

The Sun newspaper reported Sunday that Kate's sister Pippa Middleton, 34, is pregnant with her first child.

Kate's maid of honour famously stole the show at her and William's wedding with a figure-hugging dress.

The birth will be celebrated with a 41-gun salute in London's Green Park Hyde Park -- the standard 21 rounds with an extra 20 because they are royal parks.

The Tower of London will fire 62 rounds: 21, plus 20 because it is a royal palace, and a further 21 to show the City of London's loyalty to the sovereign.