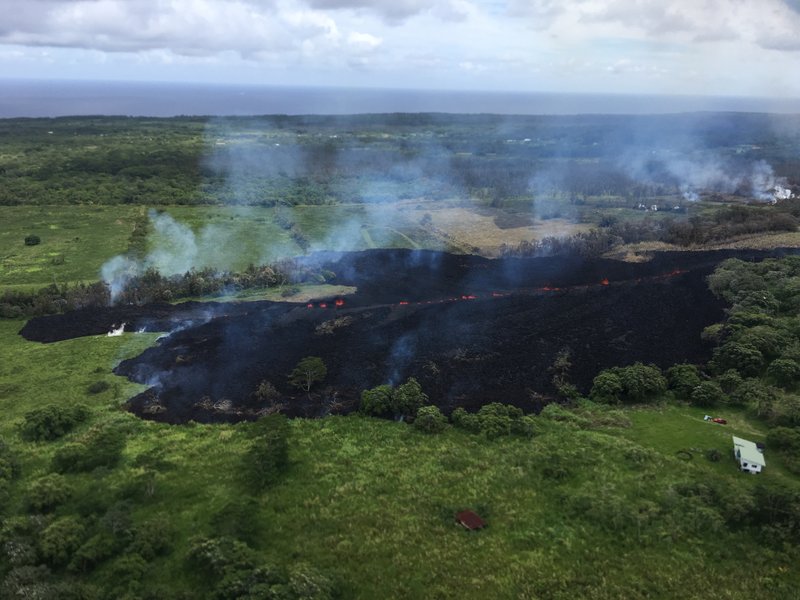 Hawaii County Civil Defense issued an emergency cellphone alert after the fissure was discovered early Sunday morning. The agency said one “unidentified structure” was destroyed by the new vent, bringing the total number of homes and other buildings lost to lava to nearly 40.

Residents living near the fissure were told to evacuate, and two nearby community centers were serving as shelters for people and pets.

Lava spread across hundreds of yards (meters) of private land and loud explosions rocked the neighborhood not far from the Leilani Estates subdivision, where more than a dozen other active vents opened over the past week.

Nearby resident Richard Schott, 34, watched from a police checkpoint as the eruption churned just over a ridgeline and behind some trees.

“I’ve actually seen rocks fly over the tree line and I can feel it in my body,” Schott said. “It’s like a nuclear reaction or something.”

“The appearance of the fissures in the past couple of days does not change the overall picture or concern,” USGS scientist Steve Brantley said.

Christian and Maritza Ricks, who moved to the area from California in April, stopped at the side of the road to watch and listen to the latest eruption.

“I guess it’s just part of living on the island,” Ricks said.

He said he wasn’t really afraid of the destruction happening around him.

“In a way it’s kind of exciting to see what’s going on and be this close to it,” Christian Ricks said.

Most of the lava outbreaks have occurred in and around Leilani Estates, where molten rock has burst through the ground, destroying more than two dozen homes and resulting in evacuation orders for nearly 2,000 people.

The US Geological Survey has reported nearly 20 active fissures. One that opened Saturday night was spattering, but no flow had formed.

The Hawaiian Volcano Observatory reported the fissures opened just east of the Puna Geothermal Venture energy conversion plant, where steam and hot liquid are brought up through underground wells and the steam feeds a turbine generator to produce electricity.

Plant workers last week as a precaution removed 50,000 gallons (189,265 liters) of a flammable liquid stored at the site.

Geologists have warned that Kilauea’s summit could have an explosive steam eruption that would hurl boulders and ash miles into the sky.