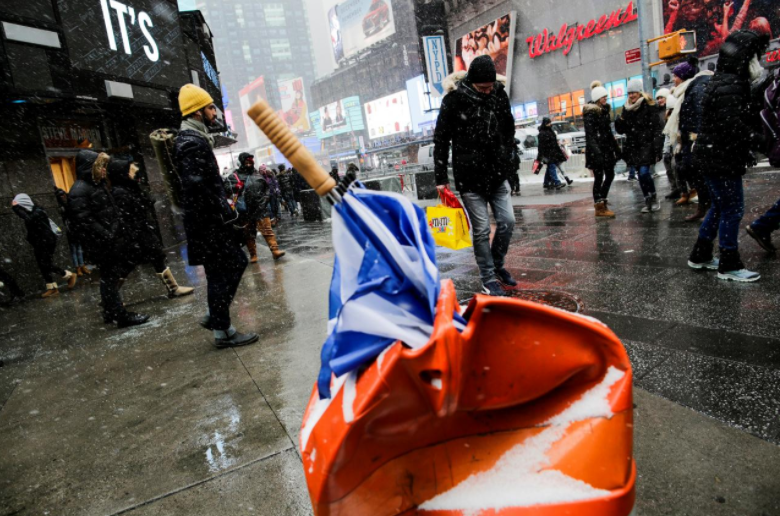 A damaged umbrella is seen in the trash can while people walk around Times Square, as a cold weather front hits the region, in Manhattan, New York, US, December 30, 2017. REUTERS/Eduardo Munoz

A fresh jolt of arctic air will usher in the new year for much of the United States this weekend, bringing record cold temperatures on New Year’s Day to cities in the Midwest and East Coast, forecasters said on Saturday.

During the final hours of 2017, the mercury in New York City’s Times Square will drop to about 10 degrees Fahrenheit (minus 12 Celsius), with the wind chill at nearly 0 F, the National Weather Service said, testing the endurance of hundreds of thousands of New Year’s Eve revelers.

In the heartland, next week could bring low temperatures last recorded 130 years ago to parts of Nebraska, said David Eastlack, a meteorologist with the NWS. That includes a record low for the date of -22F for Tuesday.

“The bitter cold is going to be dangerous,” he said in a phone interview, warning residents of eastern Nebraska and western Iowa to avoid venturing outside or taking a car trip. He said that the wind chills will be near minus 35 F, a level when frostbite could set in within 10 minutes.

Temperatures could drop to around 0 F as far south as the northern border of Oklahoma on New Year’s Day, and into the minus 30s near the Canadian border on Sunday and Monday, the NWS said. The arctic air from Canada will also bring sub-freezing temperatures on US Gulf Coast cities such as Biloxi, Mississippi.

Icy roads will make travel difficult over much of the US from the south-central states from Texas and Oklahoma and eastward over Arkansas, northern Louisiana, Mississippi and Alabama through the New Year’s weekend, AccuWeather said.