People look at confetti as it's thrown from the Hard Rock Cafe marquee as part of the annual confetti test ahead of the New Year's Eve ball-drop celebrations in Times Square in New York City, December 29, 2017. REUTERS/Eduardo Munoz

Hundreds of thousands of merrymakers are making the annual pilgrimage to New York’s Times Square on Sunday to witness the giant New Year’s Eve ball drop at midnight, undeterred by bitter cold and an unprecedented security operation.

The temperature in midtown Manhattan is expected to plunge to about 10 degrees Fahrenheit (minus 12 degrees Celsius) in the waning hours of 2017, with a “Real Feel” of 4F (minus 15C), according to AccuWeather.com.

Madry Cox, 16, and his sister, Mattison, 19, traveled from Lubbock, Texas, to New York with their father for what he called a “once-in-a-lifetime opportunity” to see the glittering spectacle that unfolds in Times Square every Dec. 31.

“It’s worth bearing the cold to see the ball drop on New Year’s Eve,” he said. “It’ll be great.”

Mattison Cox said she plans on wearing plenty of clothes, while still managing to look “a little bit cute,” and drinking coffee to stay warm.

“I’ve only seen it in the movies,” she said. “It’s nice to come witness in person.”

This year, police expect roughly 2 million people to crowd into the general vicinity of Times Square, the bow-tie-shaped plaza formed by the intersection of Broadway and Seventh Avenue in midtown Manhattan. That is roughly the same number as last year, when the temperature at midnight was a comfortable 44F (7C).

A limited number of people will have access to fenced-off viewing areas within the square, giving them an unobstructed view of the giant crystal ball mounted on a pole atop a building at the southern end of the square. 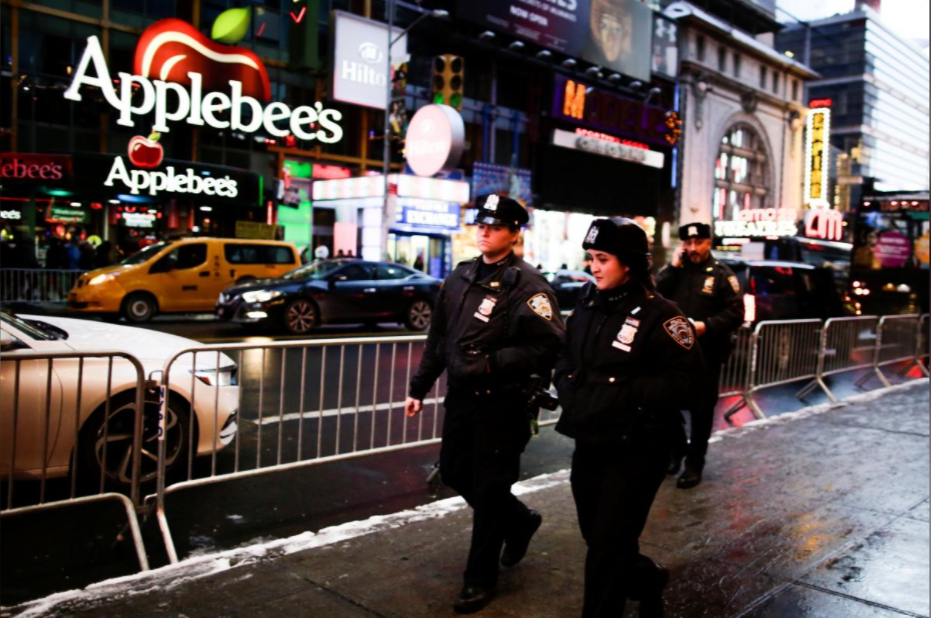 After hours of waiting, the throng will witness the ball’s one-minute descent ending at the stroke of midnight, when a barrage of fireworks and confetti will punctuate the moment.

“This event every year, New Year’s Eve, is one of the things that people all over the country, all over the world, most associate with New York City,” Mayor Bill de Blasio told reporters last week. He said the annual rite of winter was a source of pride for the city and “a huge, joyous event.”

Revelers will count down the final hours of 2017 with a lineup of musical acts including Nick Jonas and Neil Diamond.

Then comes the ball drop, a tradition that dates to 1907, three years after New Yorkers started gathering en masse in Times Square to usher in the new year.

The lighted ball, actually a geodesic sphere 12 feet (3.7 meters) in diameter and covered by illuminated crystals, will descend 70 feet (21 meters) in the final 60 seconds.

Thousands of police will be on hand, some of them heavily armed, others undercover. The show of force is part of a beefed-up security plan that follows a spate of attacks in the city and around the world that authorities have labeled as terrorist.

The New York Police Department has provided officers with specialized training to stop any suicide bombers in response to an attempted bombing in a Times Square subway station walkway on Dec. 11.

Police will also deploy observation teams trained to spot snipers, increase the number of explosive-detecting dogs and position more officers throughout the area this year.

People who want to see the New Year’s Eve musical acts and other entertainment up close in Times Square will have to pass by dogs trained to detect explosives and heavily armed officers, go through a magnetometer to check for weapons, have their bags inspected, and then repeat all those steps a second time.

Police will again use dump trucks filled with sand, police cars and cement blocks to close streets starting at 11 a.m. (1600 GMT) on Sunday. About 125 parking garages in the area will be emptied of all cars and sealed.