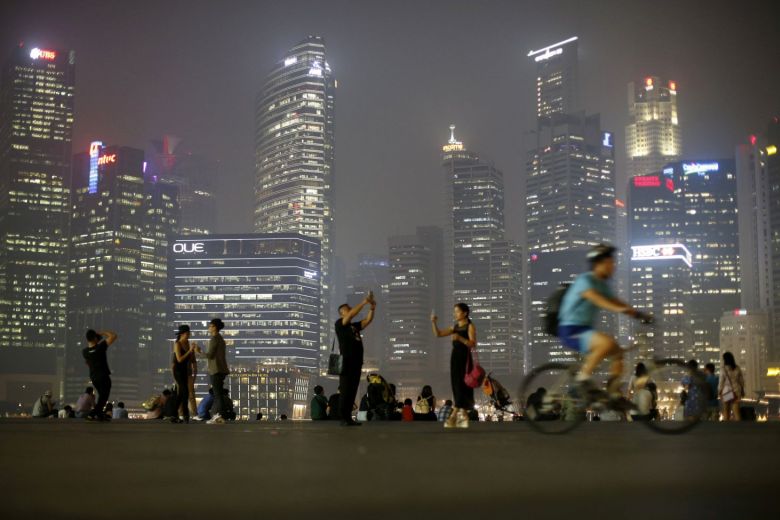 People taking photos against the skyline of the central business district of Singapore where the Trump-Kim summit is planned to be held on June 12.(File Photo: Reuters)

During television appearances on May 13, both US Secretary of State Mike Pompeo and National Security Adviser John Bolton said that US President Donald Trump will push for a complete, verifiable, and irreversible denuclearization, which basically means that North Korea cannot have nuclear weapons and must allow inspectors to certify that Pyongyang cannot make new ones.

Bolton argued that North Korea needs to be a normal country if Kim Jong-un wants to build normal relationships with the rest of the world. According to Bolton, the US wants North Korea to call an end to its nuclear program, after which the community of nations would welcome North Korea.

Meanwhile, with his two separate appearances in a single day, Pompeo made a different statement. On Fox News Sunday, he said that US' interest is preventing the risk that North Korea will launch a nuclear weapon into Los Angeles or Denver or into the very place he and the anchors are sitting that morning. Pompeo added that what he said is the objective and the end goal that President Trump has laid out. This means that Trump administration only wants to ensure that North Korea cannot hit the US with a nuclear weapon. It is entirely different from Bolton's narrative.

However, when he spoke on CBS’s Face the Nation, Pompeo said that North Korea needs to get rid of all its nuclear arsenal that threatens the US, and also chemical and biological weapons program and missiles that threaten the world. Only after North Korea does that will the US will ensure the North has an opportunity for greatness.

This gave a little more insight into the Trump administration's thinking. The US wants North Korea to get rid of nuclear-tipped long-range missiles, and it also wants Pyongyang to remove its chemical and biological weapons from the country.

Pompeo said that the US and North Korea are in complete agreement about what the ultimate objectives are for the June 12 summit between Kim and Trump in Singapore. However, he has failed to demonstrate this is true.

There are other voices from the academics and media speaking out on the issue.

Separately, an analysis from Business Insider concluded that the end result could be a mediocre outcome that falls between two possible catastrophes. The first unlikely outcome is that Trump walks away with Kim's nuclear weapons and the second extreme outcome is catastrophic failure.

What is more likely to expect is that the US would accept some mixture of half measures to slowly wind down North Korea's nuclear programs while providing the country with sanctions relief — much like the deals that have previously failed, experts noted.