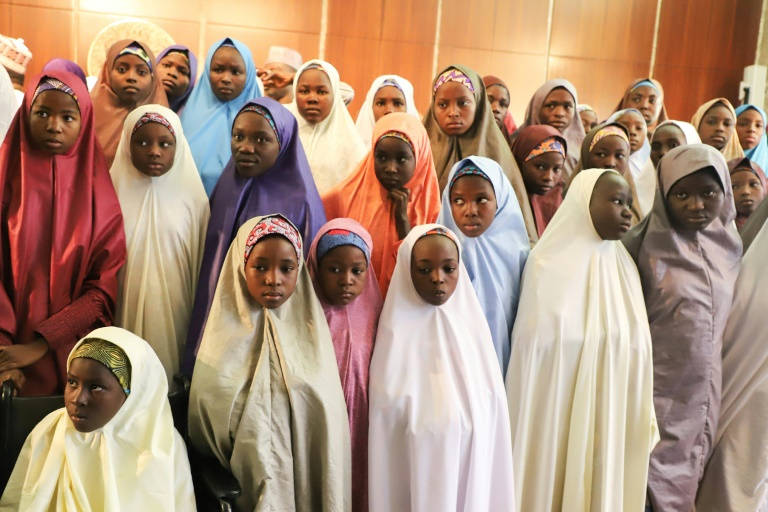 Freed Dapchi schoolgirls wait to meet Nigerian President Muhammadu Buhari, who has vowed to do 'everything in our power to bring Leah back safely' (Photo: AFP)

Residents of the Nigerian town of Dapchi were hoping Sunday for the release of the last schoolgirl, who is also a Christian, from among a group of more than 100 kidnapped and released by Islamists, following encouraging indications from authorities.

Her freed schoolmates said the girl, Leah Sharibu, remained in captivity as she had refused to convert to Islam.

"There is so much expectation in the town following the news that the last remaining girl will be released," Kachalla Bukar, father of one of the schoolgirls recently freed, told AFP late Saturday by phone from the town in the northeastern state of Yobe.

"We were told she was on her way but she has not yet been brought," said Kachalla, who is the spokesman of the abducted schoolgirls' parents union.

The authorities had asked shopkeepers to close Saturday afternoon in anticipation of her arrival.

Idris said he cancelled a visit to Dapchi to avoid any "security hitch" in the town before Leah's arrival, without providing further details.

But on Sunday, a spokesman for the national police said that Idris' comments had been "misunderstood and misquoted".

"The misunderstanding may be as a result of the already released Dapchi schoolgirls expected back home in Yobe State today but could not arrive due to weather conditions," spokesman Jimoh Moshood said in a statement.

The police "reiterates that it has no information yet on the release of the last Dapchi schoolgirl," he said.

In all, 105 of the 111 schoolgirls abducted on February 19 from their boarding school in Dapchi were released on Wednesday, raising questions about possible ransom payments.

They were brought back by members of the Boko Haram jihadist group in nine trucks.

According to witnesses contacted by AFP, the girls were held on an island on Lake Chad, which is a known stronghold for fighters loyal to Boko Haram factional leader Abu Mus'ab al-Barnawi.

Five of the girls died in captivity, according to their fellow students.

"The sudden withdrawal of soldiers from checkpoints is a clear sign the girl is coming," said Dapchi resident Sanda Masida.

"We believe the news of the girl's release is true because the body language of the security personnel, police and military, indicates the girl is on her way home," said another resident, Tijjani Goni.

"The town is in high spirits and full of anticipation," Goni said.

President Muhammadu Buhari vowed on Twitter to do "everything in our power to bring Leah back safely".

The Dapchi kidnapping revived painful memories in Nigeria of the April 2014 abduction of over 200 schoolgirls from Chibok, a town also in the northeast, which caused global outrage.

While some of the Chibok girls have been freed in exchange for ransom and the release of top Boko Haram commanders, a total of 112 remain in captivity.

Boko Haram has repeatedly targeted schools giving a so-called Western education in the mainly-Muslim region as part of an insurgency that has killed at least 20,000 people and displaced more than 2.6 million since 2009.

While a 2015 offensive launched by Buhari successfully reclaimed swathes of territory back from the jihadists in Nigeria, the group still stages deadly attacks on both military targets and civilians.