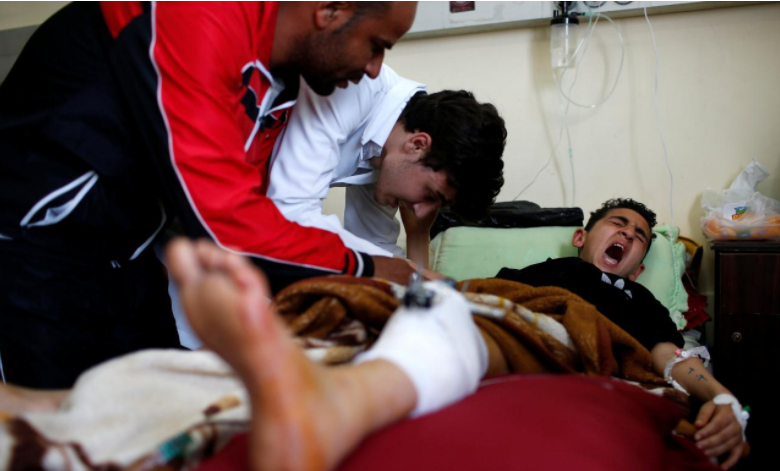 A young Palestinian who was wounded at the Israel-Gaza border reacts at al-Shifa hospital in Gaza City April 1, 2018 (Photo: Reuters)

Israel’s defense minister rejected on Sunday calls for an inquiry into the killing of 15 Palestinians by the military during a Palestinian demonstration that turned violent on Friday at the Gaza-Israel border.

A tense calm descended on Sunday on the border area, where hundreds of Palestinians, a fraction of the tens of thousands who initially turned out, remained in tent encampments along the fenced 65-km (40-mile) border.

Organizers expect many to come back on Friday, when schools and businesses are closed for the Muslim sabbath, and rejoin the planned six-week protest pressing for right of return for refugees and their descendents to what is now Israel.

Pope Francis, in an apparent reference to the events in Gaza in his Easter address, called for “reconciliation for the Holy Land, also experiencing in these days the wounds of ongoing conflict that do not spare the defenseless.”

Avigdor Lieberman, the Israeli defense minister, rejected criticism of Israel’s actions, saying soldiers along the Gaza frontier “deserve a medal” and did what was

At his bedside, Bashar’s father said he had no idea his son had gone to the protest.

The Israeli military accused Hamas of “cynically exploiting women and children” by sending them to the fence. A Hamas spokesman called the allegations “lies aimed at justifying the massacres”.

necessary to protect the border.

“As for a commission of inquiry - there won’t be one,” he told Israeli Army Radio.

The United States blocked a Kuwait-drafted UN Security Council statement on Saturday, diplomats said, that would have called for an independent investigation and urged restraint by all sides.

In a Gaza hospital on Sunday, a 12-year-old Palestinian boy hit by Israeli gunfire on Friday said that when he approached the border fence with others in the crowd, he thought he would be safe as long as he did not touch the barrier or throw stones.

Hundreds had ignored calls by protest organizers and by the Israeli military to stay away from the frontier. The military said some of those who were shot had fired at soldiers, rolled burning tires and hurled rocks and fire bombs toward the border.

“I was just standing there when I felt something hit my leg and it pushed me to the ground,” the boy, Bashar Wahdan, told Reuters, estimating his distance from the fence at 30 meters (yards). The bullet cut through blood vessels and broke a bone.

At his bedside, Bashar’s father said he had no idea his son had gone to the protest

The Israeli military accused Hamas of “cynically exploiting women and children” by sending them to the fence. A Hamas spokesman called the allegations “lies aimed at justifying the massacres”.

On Saturday, Israeli troops using live ammunition and rubber bullets shot and wounded about 70 Palestinians among demonstrators at the border, Palestinian officials said. Witnesses said stones were thrown at the soldiers.

Doctors at Gaza’s crowded Shifa hospital said they were running out of medicine and other supplies.

The protest is scheduled to culminate on May 15, when Palestinians mark the “Nakba” or “Catastrophe” when hundreds of thousands fled or were driven out of their homes in 1948, when the state of Israel was created. Israel has long ruled out any right of return, fearing it would lose its Jewish majority.