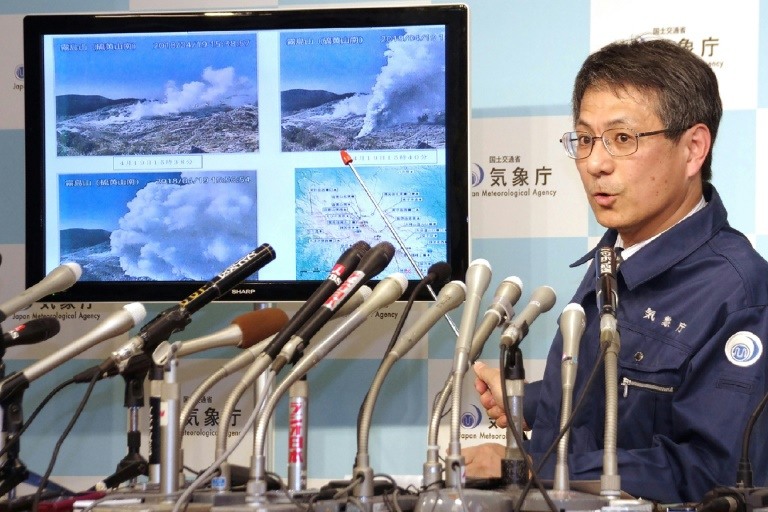 Mount Io, which has erupted for the first time since 1768, may become more active, volcanologist Makoto Saito warns.(Photo: AFP)

A volcano in southern Japan erupted for the first time in 250 years on Thursday, spewing steam and ash hundreds of metres into the air, as authorities warned locals not to approach the mountain.

"There is a possibility that (Mount Io) will become more active," said Makoto Saito, an official from the Japan Meteorological Agency (JMA), confirming the eruption.

In a televised press conference, he warned residents in the area to stay away from the mountain, part of the Mount Kirishima group of volcanoes, as major ash deposits spread from the crater.

It was the first eruption of the mountain since 1768, the JMA said.

The agency warned that large flying rocks could fall over a three-kilometre (two-mile) radius.

Footage captured by the JMA and local media showed thick white and grey smoke rising from several areas of the mountain.

There were no immediate reports of injuries, Chief Cabinet Secretary Yoshihide Suga said, adding that the government was "taking all possible measures" to prevent damage and casualties.

The eruption occurred a few kilometres (miles) away from Shinmoedake, which featured in the 1967 James Bond film "You Only Live Twice" and erupted in March.

Japan, with scores of active volcanoes, sits on the so-called Pacific "Ring of Fire" where a large proportion of the world's earthquakes and volcanic eruptions are recorded.

In January, a Japanese soldier was killed and several other people injured after an eruption near a popular ski resort in northwest of Tokyo.

An estimated 63 people were killed in the shock eruption which occurred as the peak was packed with hikers out to see the region's spectacular autumn colours.