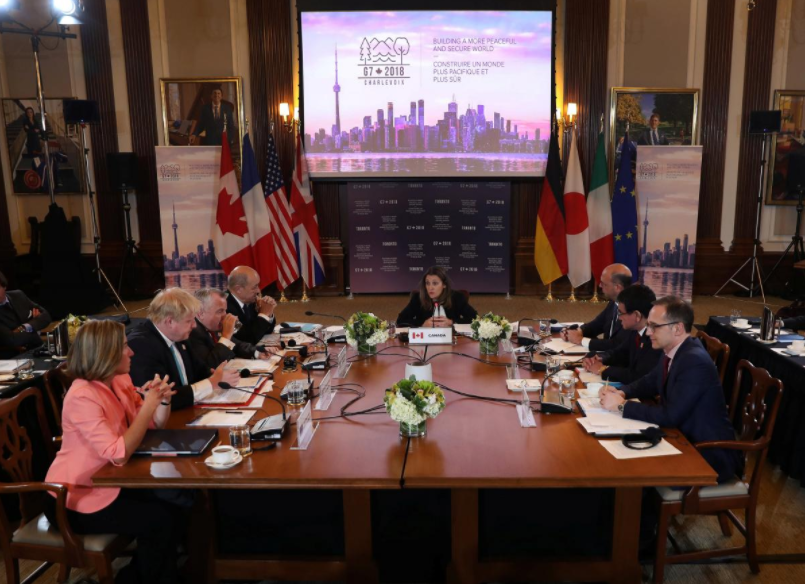 Toronto (People’s Daily) – Russia and North Korea’s nuclear issue are high up on the agenda for the Group of Seven (G7) Foreign Ministers meeting underway in Toronto, according to an itinerary released by Canada’s Foreign Ministry.

The ministers will discuss North Korea during its working session, and Russia will be the primary topic during their working lunch and dinner for Sunday.
According to Canada’s leading newspaper the Globe and Mail, the G7 ministers will discuss how to keep the pressure on North Korea even after the country announced last week it would suspend its nuclear and long-range missile tests and planned to close its nuclear test site.
The ministers will also discuss how to keep the pressure on Russia, but extra sanctions are not on the agenda. Last week, G7 leaders issued a statement condemning the April 7 chemical attack in Syria’s Eastern Ghouta region, while expressing support for the US-led airstrikes that followed a week later.
G7 members include the US, Britain, Canada, Germany, France, Italy, and Japan.
This year, Canada holds the G7 presidency. This year’s theme for the two-day meeting is “Building a More Peaceful and Secure World.”
The ministers will also discuss how to stand against foreign interference which is perceived as a growing threat in the West, and to manage extremist travellers such as returning foreign terrorists.