The man taken into custody by the New York Police Department after Tuesday's terror attack that killed at least eight is 29-year-old Sayfullo Saipov of Tampa, Florida, according to an ABC News report.

Saipov is an Uzbek national and came to the U.S. in 2010, NBC News reported.

Police stopped Saipov in Mount Holly Springs Borough, Pennsylvania, just south of Carlisle, in March 2015 and he gave police a Paterson, New Jersey address, according to court records. He also was stopped in 2012 in Palmyra, Pennsylvania, just east of Hershey, and also listed a Paterson address.

A man who has lived in the building Saipov gave to police said his aunt owns the building and that a woman and her child live in the apartment in question. No one was home Tuesday evening when an NJAM reporter arrived. Another woman who lives in the building said she had never seen Saipov but remembers noticing his name on a piece of mail.

One mile down the road, police surrounded Omar Mosque, blocking off the perimeter. Omar Khan, a 17-year-old who said he prays at the mosque five times a day, said he did not remember seeing Saipov in the mosque.

Videos from the attack posted online show Saipov dodging cars in lower Manhattan, horns beeping in the background. ABC interviewed a witness who said he saw Saipov run toward a group of children. Police have said the objects Saipov was holding were imitation firearms. 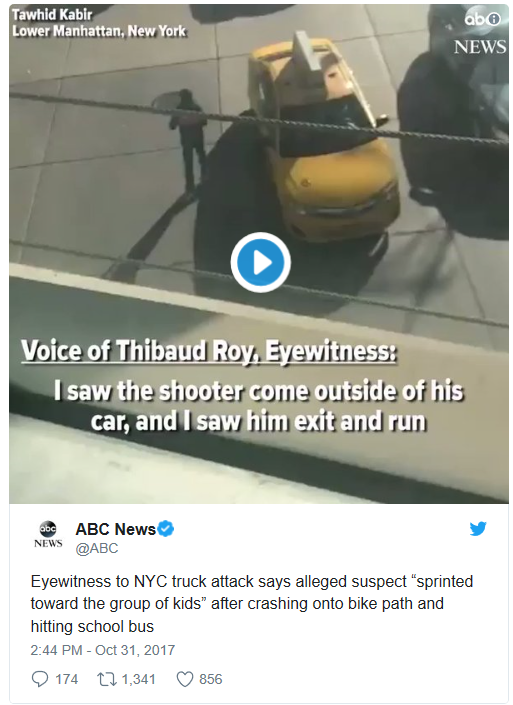