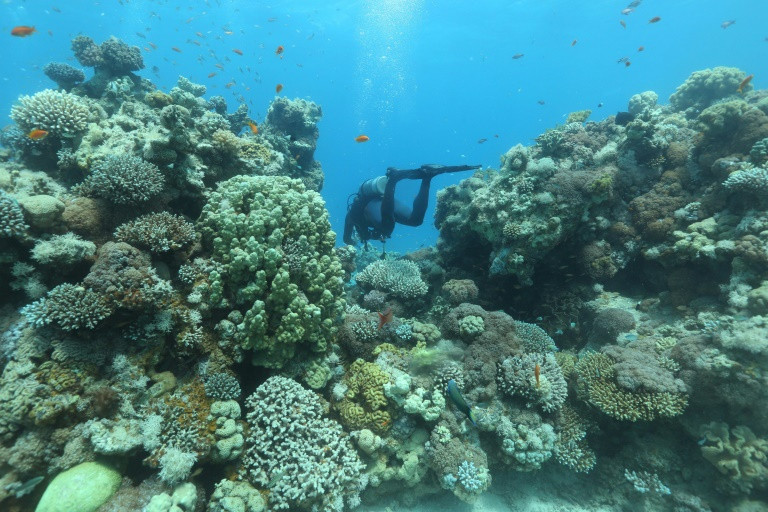 A scuba diver checking coral reefs in the Red Sea off the southern Israeli resort city of Eilat. Photo: AFP

When coral reefs come in contact with plastic trash in the ocean, their risk of becoming diseased skyrockets, said an international study out Thursday.

Researchers examined more than 120,000 corals on 159 reefs -- some polluted with plastic, others not -- from Indonesia, Australia, Myanmar and Thailand for the study in the journal Science.

"We found that the chance of disease increased from four percent to 89 percent when corals are in contact with plastic," said lead author Joleah Lamb, from the ARC Centre of Excellence for Coral Reef Studies at James Cook University in Australia.

Lamb said scientists are still trying to figure out why plastics are so dangerous for coral, which are living organisms that cover about 0.2 percent of the ocean floor -- but provide crucial habitat for nearly a million species of young fish.

It could be that "plastics make ideal vessels for colonizing microscopic organisms that could trigger disease if they come into contact with corals," she said.

"For example, plastic items such as those commonly made of polypropylene, like bottle caps and toothbrushes, have been shown to become heavily inhabited by bacteria that are associated with a globally devastating group of coral diseases known as white syndromes."

The problem of plastic pollution is widespread in the world's oceans, and is rapidly getting worse.

"We estimate there are 11.1 billion plastic items on coral reefs across the Asia-Pacific and forecast this to increase by 40 percent within seven years," Lamb said.

"That equates to an estimated 15.7 billion plastic items on coral reefs across the Asia-Pacific by 2025."

Coral reefs are already under stress due to global warming, which boosts diseases and can cause coral to bleach and die.