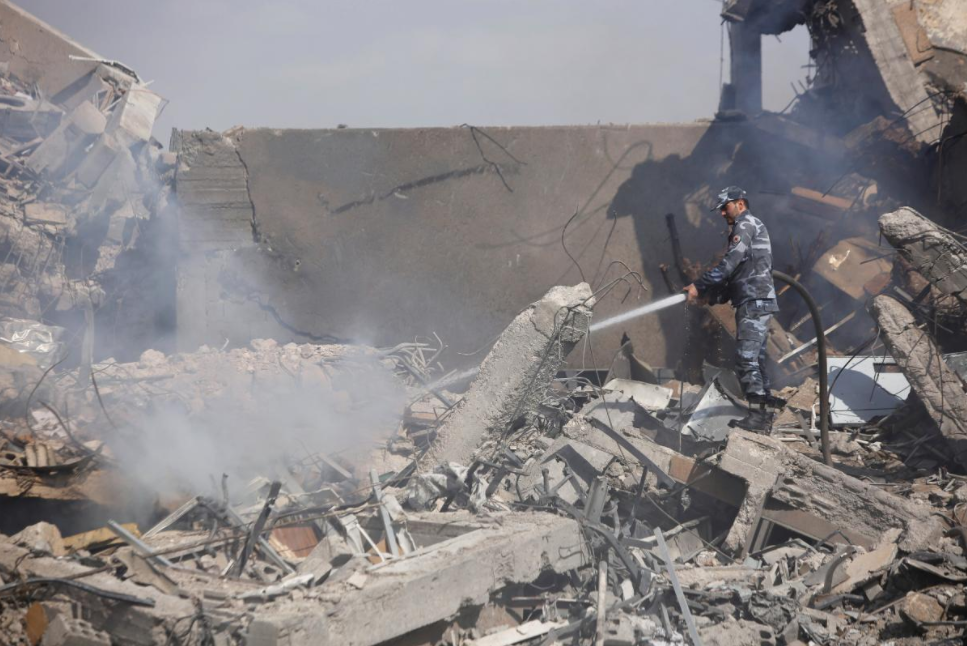 Gold and oil will extend their gains on Monday, albeit modestly, when markets open for the first time since Western powers launched a missile attack on Syria, but equities are unlikely to suffer big losses unless the West strikes again or Russia retaliates.

“The news flow is actually better than what it looked like at one point during last week as the strike was surgical, followed by a pullback. Reports show a lot of care was taken not to hit Russian targets, which is a good sign and the market should take heart from that,” said Salman Ahmed, chief investment strategist at Lombard Odier investment managers in London.

Gold has benefited in recent days as a safe-haven asset amid a U.S.-China trade dispute and the escalating conflict in Syria, which also pushed oil above $70 per barrel due to concerns about a spike in Middle Eastern tensions.

Despite heightened geopolitical risks, the impact on so-called safe-haven assets has been short-lived and modest. While the yen rose initially on fears of a Syrian strike, it ended near seven-week lows to the dollar last week.

On Saturday, U.S., French and British missile attacks struck at the heart of Syria’s chemical weapons program in retaliation for a suspected poison gas attack a week ago, although the assault appeared unlikely to halt Syrian President Bashar al-Assad’s progress in the seven-year-old civil war.

The bombing, denounced by Damascus and its allies as an illegal act of aggression, was the biggest intervention by Western countries against Assad and his powerful ally Russia.

But the three countries said the strikes were limited to Syria’s chemical weapons capabilities and not aimed at toppling Assad or intervening in the civil war.

Naeem Aslam, chief market analyst at Think Markets, said gold was poised to gain on Monday but the rally wouldn’t be very steep: “The focus will be on the counter-reaction from Russia.”

Gold, often used as a store of value in times of political and economic uncertainty, could rally towards $1,400 per ounce after two consecutive weeks of gains.

Tokyo will be the first major market to open on Monday and the yen will likely strengthen to the dollar, but not beyond 106.50, said Itsuo Toshima, market analyst at Toshima & Associates adding that he didn’t expect stocks traders to make sharp moves.

“The first attack was within expectations and was already priced in the market ... However, if there is a second round of strikes, that is not in line with expectations. So that should prompt a sharp risk-off move in markets,” he added.

Frank Benzimra, head of global markets for Asia Pacific at Societe Generale Corporate and Investment Banking, said stocks would plunge only in case of new strikes by Western powers.

In case of such an escalation, oil would rally further, the yen would spike and Japan’s domestic defensive stocks would outperform international stocks.

“For the stress on Asia equity markets to be sustainable, we would need to have oil prices spiking to such a level that fundamental concerns, i.e. higher inflation and risks on growth, return to the market,” he said.

Amrita Sen from Energy Aspects said that despite Middle Eastern tensions and looming new U.S. sanctions on Iran, oil has outperformed most expectations this year and may have rallied too far too fast.

“We are likely to get a sell-off this week as the extent of the Syrian strikes have been muted and, in general, calmer nerves prevail in Washington,” she said.

Oil traders had locked in long positions ahead of the weekend, in anticipation of potential strikes, sending both West Texas Intermediate CLc1 and global benchmark Brent LCOc1 crude futures to their highest since 2014.