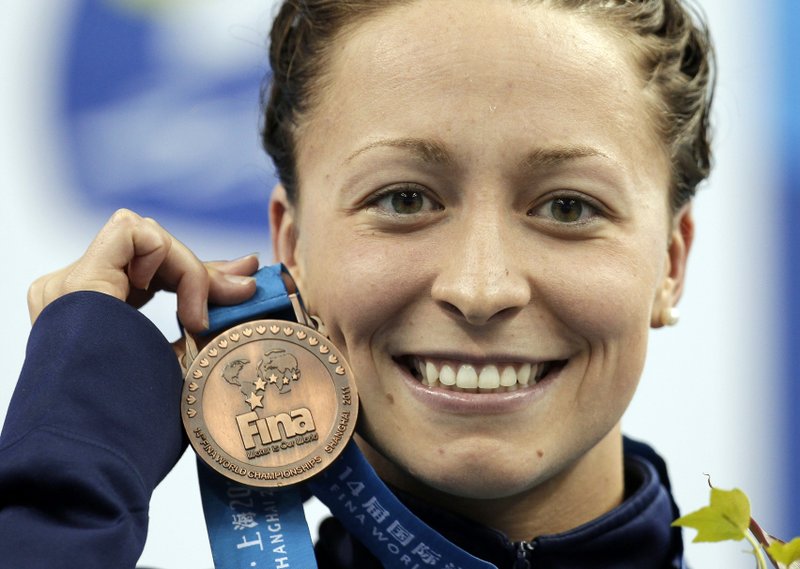 Ariana Kukors wrote online that Sean Hutchison meticulously controlled and manipulated her from a young age and that the abuse at times overshadowed the successes she experienced swimming, including at the 2012 Olympic games in London, where she placed fifth in the 200-meter individual medley.

“I think back on those times now, tearfully asking why no one helped me ... why no one stepped in to save me from this monster. It’s still hard to comprehend, but Sean had perfected the art of grooming; I wasn’t even aware I needed saving,” she wrote.

The world champion’s essay revealed new information about the investigation years ago into a possible relationship between her and Hutchison by USA Swimming, the sport’s governing body, which critics have said was cursory and insufficient. It followed other sex abuse scandals in the sport that led to lifetime bans.

Kukors wrote that the inquiry in January 2011, when she was 21, consisted of her talking to a private investigator by phone and answering fewer than 20 questions.

“I was scared. I lied. I had never felt more alone in all my life,” she wrote of the time. When USA Swimming closed the investigation several weeks later, saying they had found no wrongdoing and calling rumors against Hutchinson “malicious lies,” ″that shut me up real quick,” she said.

Hutchison has denied allegations of misconduct or that he groomed Kukors for abuse from a young age. The former Olympic assistant coach hasn’t been charged with a crime, but authorities searched his Seattle apartment this week.

“At no time did I ever abuse Ariana Kukors or do anything with her that was not consensual,” he said in a statement Thursday.

A message to his attorney and an email to a spokeswoman for USA Swimming seeking comment on the essay were not immediately returned.

In her piece, which a representative confirmed, Kukors wrote that when she reached “the pinnacle of her sport” by qualifying for the 2012 Olympic team, she was petrified of how Hutchison would react.

When the swimming events ended in London, Hutchison made sure she returned home, missing the closing ceremony, because “in Sean’s eyes, I had been selfish enough,” she wrote.

She said that when she returned home, her swimming career was over and she joined him in Seattle, “where he locked me away on the 21st floor,” only allowing her to come and go when he wanted, because he was paranoid of the rumors of their relationship.

In 2013, after reaching a breaking point and feeling “like a hostage in my own home,” she left.

Kukors, a Seattle-area native, also described how she fell in love with the sport when she was 5 and poured everything into her training and progressed with supportive coaches.

But that changed when Hutchison became her instructor at 13 — “the grooming began immediately,” she wrote. When she was 16 and he was 36, she wrote that he began having her sit on his lap, kissing her and touching her over her clothes and watching her shower.

“Swimming was, and always will be, the beacon of light that calls me home,” she wrote in a nearly 4,000-word essay. “Unfortunately, because of the success I was having in the pool, it only made my attachment to Sean stronger, and he convinced me that I could only swim fast for him.”

USA Swimming said Thursday that Kukors’ statement earlier this week was the first time it learned of the underage abuse allegations and that “our hearts go out to Ariana and the difficulty she has gone through to reach this point of disclosure.”

It’s another scandal for the swimming organization and the sports world, which was rocked by a litany of sexual misconduct by former USA Gymnastics sports doctor Larry Nassar.

USA Swimming revealed in 2010 that sex abuse allegations were mostly to blame for lifetime bans of 46 members and said it set up training and enhanced screening for all coaches, officials and volunteers.

Kukors’ attorney in California, Robert Allard, compared his client’s case to the one against Nassar.

“Much like the USOC knew about Larry Nassar years before his arrest and did nothing, USA Swimming had notice in 2010 that Sean Hutchison was involved in an inappropriate coach-athlete relationship with Ariana and took no actions to protect her or other swimmers,” he said in a statement.

Mike Saltzstein, former vice president of USA Swimming who previously complained about the organization’s handling of sexual abuse cases, questioned the thoroughness of the investigation.

“Now with the benefit of hindsight and time, one would have to question whether there was any integrity to the first time they did this investigation,” he said, adding that a more thorough inquiry may have uncovered other problems, including allegations of underage abuse.

Saltzstein said he believes relationships between swimmers and coaches are inappropriate and represent an imbalance of power. He said USA Swimming should ensure that allegations are reported to law enforcement.

Hutchison left coaching after the investigation but remained a member of the organization as owner of member club King Aquatic near Seattle, USA Swimming said.

Hutchison’s bio has been removed from the club’s website. Head coach Michael Brooks says Hutchison has stepped down as an executive and has had no direct interaction with the club’s swimmers for a long time.

Olympic medalist Margaret Hoelzer, Kukors’ former teammate, said she never heard of Hutchison sexually abusing anyone but rumors were rampant that he and Kukors, then 21, were in a relationship.

“Naively, I should have probably realized it could have started earlier and could have been abuse. I wish I had,” she said, adding that dating is common among coaches and their athletes in the sport, especially in Europe.