HEADLINE One and only China in the world: Chinese FM

One and only China in the world: Chinese FM 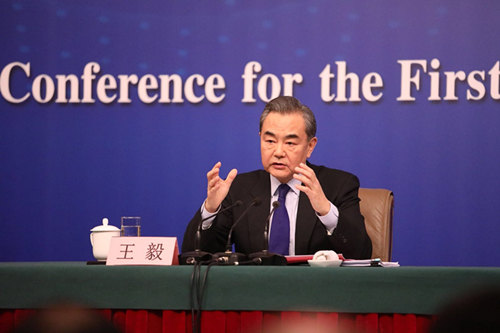 Chinese Foreign Minister Wang Yi said Thursday there is only one China in the world, and that Taiwan is an inseparable part of China.

Wang made the statement during a press conference at the first session of the 13th National People's Congress (NPC) in Beijing.

He said this has been the consensus of the international community for decades.

Adhering to the One-China principle and not having official ties with Taiwan has become a generally observed norm in international relations. It is obviously a correct choice in line with the tide of history to establish diplomatic relations and carry out regular cooperation with the government of the People’s Republic of China. This is the overriding trend and an unstoppable one, Wang explained.

He added that the key to unlocking the cross-Straits stalemate lies in recognizing the 1992 consensus and acknowledging that the two sides of the Taiwan Straits belong to one and the same China.

Taiwan authorities should return to the 1992 consensus as soon as possible. This correct move will create a bright future for the peaceful development of cross straits relations, Wang said.