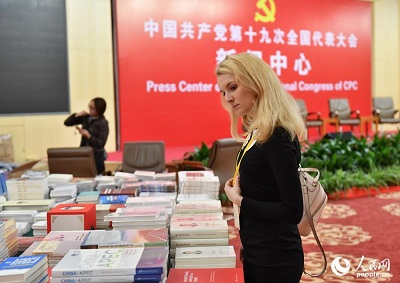 Journalists from China and abroad are attracted by the books displayed at the Press Center of the 19th National Congress of the CPC. The 19th CPC National Congress will convene on Oct. 18 in Beijing. (People's Daily Online Photo / Yu Kai)

The opening ceremony of the 19th National Congress of the Communist Party of China will be held at the Assembly Hall of the Great Hall of the People in Beijing,  the congress' press center announced.

The ceremony will begin at 9am, the center added.