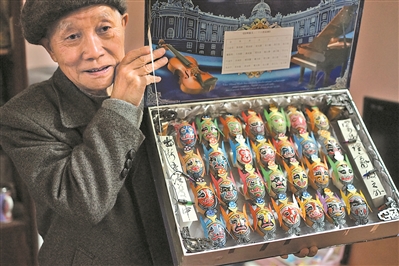 In Shanghai, there’s an elderly man who spends his days painting eggshells.

According to China News Service, Fei Yongqun has recreated Chinese characters from “Journey to the West,” “The Romance of God,” “Water Margin,” and “Romance of the Three Kingdoms,” using only an eggshell as his canvas.

“I paint eggshells to promote our traditional opera culture. As long as my health allows, I will always paint,” Fei said while expressing his dedication to the art form.

For over a decade, nearly 3,000 eggshells have been transformed into face paintings by his craftsmanship.

In 2008, his Beijing Opera mask designs were featured on CCTV’s Opera Channel, and in 2016, he was included in the 100 Masters of the Shanghai Citizen Culture Festival.

At Fei 's home, a variety of traditional artwork hangs from the walls such as paper-cutting, sachets, and his eggshell artwork.

Fei ’s hobby was inspired by his love for Peking Opera, which has always been his favorite.

Born in Zhejiang in 1939, Fei enjoyed watching traditional operas with his father.

When he was just getting started as a painter, Fei said, "I consulted with skilled professionals, bought related books and learned on my own."

Fei eventually mastered the skill and began to create his eggshell artwork, and he hasn’t stopped for 13 years.  He has transformed thousands of eggshells into tiny Peking Opera paintings.

Fei 's eggshell paintings come in sets, ranging from four to as many as several dozen.

Each painting is a play in Fei's heart. They aren’t simply pieces of treasure, but an important pieces of China’s cultural heritage.

Fei's unique work found fame, and many people wanted to know where they could buy the paintings.  Yet the artist has always insisted on not selling them, preferring to give the work away to those who are genuinely interested.

Fei will turn 80 soon, and his love for Peking Opera combined with the spirit of learning will never fade.