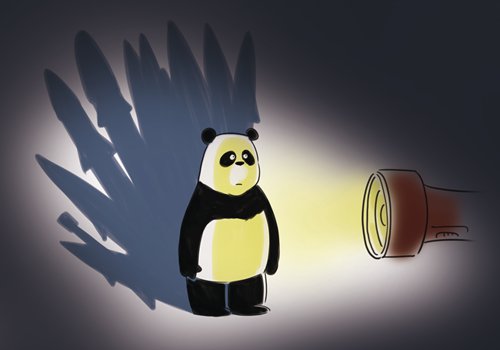 During the ongoing two sessions - the first session of the 13th National People's Congress and the first session of the 13th National Committee of the Chinese People's Political Consultative Conference - a reporter from The Washington Post asked me about the 8.1 percent increase in China's military expenditure. I told her to first check US military spending, the percentage of major countries' military expenses in their GDP, and their spending per capita and per soldier.

China's military budget has been brought into the spotlight of media hype during the annual sessions every year. The question has gone beyond one that needs technical analysis and evolved into a political pitfall. Some people always look at China through colored lenses. No matter how we develop our military strength or what the amount of increase in military spending or how much we explain, they tend to see China as a military threat.

Chinese military budget for 2018 stands at 1.11 trillion yuan ($175 billion), a year-on-year rise of 8.1 percent. Since China adopted reform and opening-up in 1978, its military expenditure grew at an average annual rate of 12.43 percent, increasing in pace with the country's fiscal revenue. Now multiple Western media outlets have raised doubts about its growth rate this year. Zhang Yesui, spokesperson for the first session of the 13th National People's Congress has made the explanation: For one, it's compensation for a lack of military investment in the past and on the other it aims to improve soldiers' welfare and military equipment. But most Western journalists refuse to buy that and instead deem it diplomatic rhetoric.

Military spending is a domestic issue of a sovereign state which is closely related to its national defense demand and capacity. Now that China has become the world's second-largest economy, its defense spending should match its position as a major country and its global missions.

In the meanwhile, we are faced with growing security threats. For instance, as stated in a slew of security assessment reports Washington released of late, the US now regards China as a "major, real threat" and has reduced the threshold for use of nuclear weapons. So how can China greet these reports with a smiling face? Should we adopt an ostrich policy to this aggressive show of US force?

The US military budget exceeds $700 billion for 2018, four times that of China. Does it make any sense that China poses a threat?

In major countries, military expenditure makes up for 2 to 5 percent of their GDP. For the US, it's about 4 percent; for Russia, 4-5 percent; and for China, less than 1.5 percent. If apportioned to its 1.3 billion-strong population, it's $134.48 per capita; and if apportioned to its 2 million soldiers, it's $87,414. These figures are at a relatively low level for the world.

A number of countries are blighted by warfare almost every day. China has not involved in a war for three decades. How did the "China threat" theory come about? None of the millions of refugees were created by wars involving China. And among the five permanent member states of the UN Security Council, China has dispatched the largest number of peace-keepers.