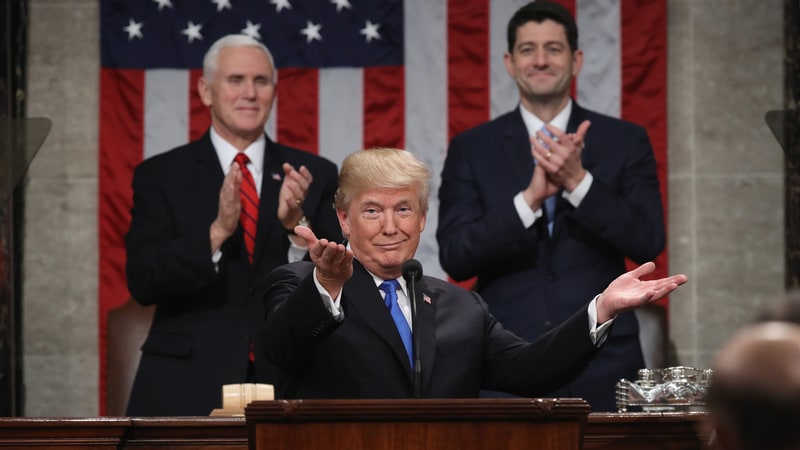 The US has finally turned the page on decades of unfair trade deals that sacrificed the prosperity and shipped away the companies, jobs and the nation’s wealth, as US President Donald Trump said in his State of the Union address.

“The era of economic surrender is over. From now on, we expect trading relationships to be fair and to be reciprocal. We will work to fix bad trade deals and negotiate new ones,” Trump adds.

He also says that the US will protect American workers and American intellectual property through strong enforcement of our trade rules, which does not cover the service trade.

His trade policy is consistent with last year’s, of which the overarching purpose is to expand trade in a way that is freer and fairer for all Americans.

Trump has done a series of moves on trade after taking office. Most of the measures were aimed at protecting US goods.

The North American Free Trade Agreement (NAFTA), labeled “the worst trade deal ever signed” by Trump, was put under renegotiation. The NAFTA entered into force on January 1, 1994 including three members: US, Canada and Mexico.

The US dropped out of the Trans-Pacific Partnership (TPP). Trump said in Davos that he could reconsider the TPP agreement, while the countries under TPP that were abandoned agreed to move forward without the US.

In January, the Office of the US Trade Representative announced that the country will impose tariffs of up to 50 percent on imported washers for the next three years, and up to 30 percent on solar cells and modules for the next four years.

The new tariff is believed to be aimed at South Korea and China. The administration has also ordered tariffs on softwood lumber from Canada.

During the Davos meeting, Trump blasted the EU for trading with US “very unfairly,” warning that his many problems with Brussels "may morph into something very big.”

The US has dropped out of the Paris Climate Agreement to get rid of the restrictions on the energy industry in order to export American coal at a lower cost.

While Trump campaigned against America’s rising trade deficit, it has only widened on his watch.

In the first 11 months of 2017, the trade deficit was about 12 percent larger than the year before, according to Scott Horsley, a White House correspondent with National Public Radio.

The administration has so far pulled its punches on protectionist measures, though additional tariffs or quotas could be forthcoming to limit imports of steel and aluminum, Horsley added.

Former Senior Vice President of the World Bank Justin Yifu Lin thinks that the US trade deficit was caused by its expanding monetary policy and financial deregulations that the US has followed since 1970s when the deficit started.

According to a McKinsey Global Institute report on the state of US manufacturing, only 1 percent of US companies export.

What restrains the US from exporting should be the major concern of the US government. Or the problem goes to why the US has such a huge need to import? To simply blame the trade deficit and economic recession on “unfair” trade is not the right solution. The White House should rethink its trade policy and internal industry sectors.

Financial Times columnist Rana Foroohar says that if the White House wants a fix, it should compare its mistakes with the strategy of China, the world’s biggest manufacturing country.

The US trade problem begins at home rather than abroad. The present trade policy may isolate the US from the rest of the world, which does no good to the US trade market and its manufacturing industry. The “free, fair, reciprocal” trade deal may backfire.