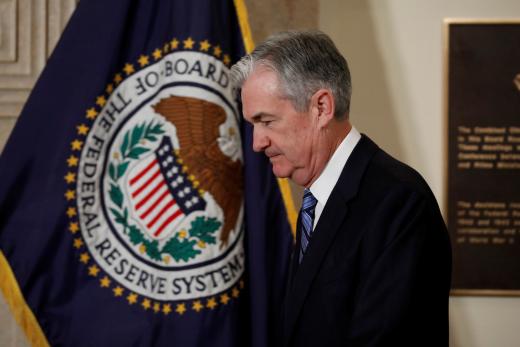 US stocks post the biggest rally in 15 months with the Dow Jones closing up 567 points or 2.3 percent at 24,912 on Tuesday, a day after a record 1,175 points plunge, which sparked fears of a possible global market crash.

The volatility came when Jerome Powell was sworn in as the 16th chairman of the Federal Reserve, who is widely expected to follow the footprints of Janet Yellen, the former Fed chairwoman, and gradually raise interest rates in 2018.

As President Trump’s pick, Powell has been through a turbulent period at Wall Street during the change in leadership at the central bank.

Trump expects his tax cuts bill and $1.5 trillion in infrastructure spending to boost the economy while escalating the budget deficit. But the Fed is good at“taking away the punch bowl just when the party gets going,”says William McChesney Martin, the longest-serving Chairman of the Fed.

US 10-year Treasury yields soared by 2.7 percent on January 29, a record high since 2014 while the S&P 500 index suffered the greatest fall since last August, before a“Black Friday”in hot pursuit.

Powell’s entry could cause uncertainty in the markets. According to Fortune after quoting John Lynch, chief investment strategist and Ryan Detrick, senior market strategist at LPL Financial in Charlotte, North Carolina, markets tend to dip slightly in the months following a new Fed chair’s entrance.

“In fact, going back more than 100 years, the Dow has been down 0.3 percent on average during the first six months after a new Fed chair takes office,”Lynch and Detrick said.

Current market volatility in the US market is close to the UK’s pre-Brexit economic downturn, with an 8.5 percent decline in the Dow Jones average since early 2018 and a 7.78 percent plunge in NASDAQ, Steen Jakobsen, Copenhagen-based bank's chief investment officer and chief economist, was quoted as saying to thepaper.cn at an interview on Tuesday.

Apparently, the interest rates are balanced by inflation as a faster normalized monetary policy will pull down the inflation rates but a slower one will also threaten an asset-price bubble in the US.

“The stock market crash now is actually the bursting of the asset-price bubble,”Guan Qingyou, an analyst with Minsheng Securities noted.

“The deep cause is the absence of new sources to stimulate economic growth,”he said, elaborating that the superficial factor is the mismatching of the financial cycle and economic cycle, which sharply collided after imbalanced contracting and expanding.

The ups and downs of US stocks are fears of investors when facing inevitable contraction after bull markets, which are actually normal adjustments, former Federal Reserve Chairman Alan Greenspan said.

The gradual rate hike policy came after the US failed to reach an inflation target of 2 percent. After hiking rates three times in 2017, US stocks hit a record high dozens of times.

“There will be a huge hidden trouble if the Fed keeps pursuing economic growth based on the 2 percent inflation target as the leverage ratio and asset price will step up further,” said Lawrence Summers, a professor at and past president of Harvard University, former US Treasury Secretary from 1999 to 2001.

Data from the FedWatch tool of the Chicago Mercantile Exchange shows that the odds of a Fed rate increase in March has dropped to 63.4 percent.

“It will still take some time for the US and global markets to completely adjust,” said Cheng Shi, head of International Research at ICBC, predicting that Powell is likely to continue Yellen’s policies and launch three rate hikes this year.

Facing such a rosy dilemma during the first stage of his tenure, Powell is struggling with the question: How do we achieve moderate economic growth while maintaining financial stability?