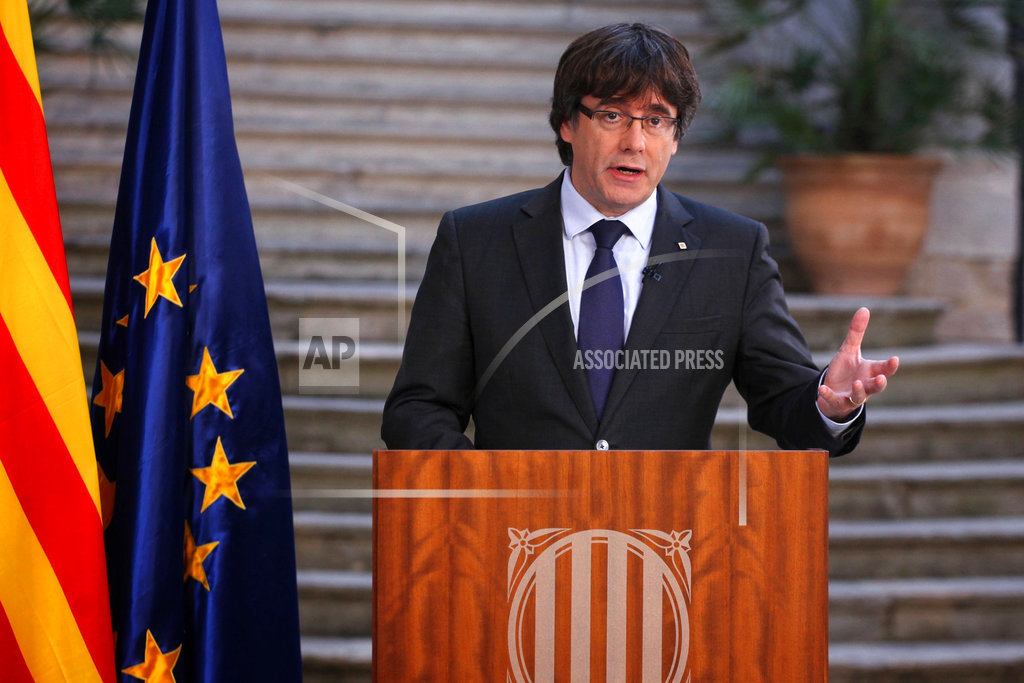 Catalan President Carles Puigdemont speaks during a statement at the Palau Generalitat in Barcelona, Spain, on Saturday, Oct. 28, 2017. Photo: AP

Catalonia's ousted leader called for peaceful opposition to Spain's decision to take direct control of the region, saying Saturday that he and other regional officials fired by the central government will keep "working to build a free country."

Carles Puigdemont's comments, made in a recorded televised address that was broadcast as he sat in a cafe in his hometown of Girona, were a veiled refusal to accept his Cabinet's dismissal as ordered by central authorities.

They came a day after one of the most tumultuous days in Spain's recent history, when Catalan lawmakers in Barcelona passed a declaration of independence Friday for the prosperous northeastern region, and the national parliament in Madrid approved unprecedented constitutional measures to halt the secessionist drive.

In his televised statement, Puigdemont said only the regional parliament can elect or dismiss the Catalan government, vowing to "continue working to build a free country."

"The best way we have to defend the achievements to date is the democratic opposition to the application of Article 155," Puigdemont said in reference to the constitutional clause that gave Madrid direct control of affairs in Catalonia.

Despite his defiant tone and the use of the official Catalan government emblem, the Catalan and European Union flags but no sign of the Spanish one, some political commentators saw his mention of "democratic opposition" as laying the groundwork for political campaigning for the regional election in less than two months.

"Our will is to continue working to fulfill the democratic mandates and at the same time seek the maximum stability and tranquility," Puigdemont said. Separatists argue that a controversial victory in a banned Oct. 1 referendum legitimizes them to split from Spain.

Andrew Dowling, a specialist in Catalan history at Cardiff University in Wales, said the statement was "vague and imprecise, certainly not like the president of a new country."

"They have led 2 million Catalans to believe in independence, so it's a big problem to tell them now that it's actually difficult to build a state when Spain has the upper hand of the law on its side," Dowling said. "They are trapped by their own rhetoric."

After Spain's central authorities made the takeover official early Saturday, Puigdemont and the 12 members who until Saturday made up the Catalan Cabinet are no longer paid.

Spain's government has said they could be charged with usurping others' functions if they refuse to obey, which could throw the region into further turmoil by prolonging a monthlong standoff.

In comments that were met late Friday with jeers and whistles of disapproval by secession supporters in Barcelona, Rajoy said the declaration of independence "not only goes against the law but is a criminal act."

Refusing to comment on Puigdemont's televised address, Rajoy's office said on Saturday that his actions will be a judicial affair from now on and that the Dec. 21 election would be the way "to return dignity to the Catalan institutions."

It's not clear at all whether a new election would solve Spain's problems with separatists in Catalonia. Polls suggest pro-independence parties would likely maintain their slim advantage in parliamentary seats but wouldn't get more than 50 percent of the vote.

Beyond any possible resistance from top Catalan officials, it's unclear how Rajoy's government in Madrid will be able to exert its control at lower levels of Catalonia's vast regional administration.

Catalonia had secured the ability to govern itself in many areas, including education, health and policing, since democracy returned to Spain following the death of dictator Gen. Francisco Franco in 1975.

Some among Catalonia's roughly 200,000 civil servants have said they will refuse to obey orders from Madrid. They risk being punished or even fired under the special powers granted to central authorities by the nation's Senate on Friday.

Spanish Deputy Prime Minister Soraya Saenz de Santamaria will be Rajoy's point person in running Catalonia until the new regional election. She will coordinate other ministries that take over functions of Catalonia's regional departments, including finances and security, and appoint officials to implement orders from Madrid.

In one of the first moves, Spain's Interior Ministry published an order to demote Josep Lluis Trapero from his position as head of the regional Mossos d'Esquadra police in Catalonia. He was allowed to remain as commissar, but he later released a statement saying he was resigning from the force.

Trapero became a divisive figure as the public face of the police response in mid-August to deadly extremists' attacks in and near Barcelona. He was praised for effectiveness but also criticized for coordination problems with other national police forces.

Spain's National Court is also investigating him as part of a sedition probe related to the banned Oct. 1 independence referendum, when the regional police were seen as acting passively — not aggressively — to halt the vote deemed illegal by a top Spanish court.

Trapero's boss, regional police director Pere Soler, said in a statement that he accepted his firing by central authorities in Madrid.