The furor surrounding the murder of 24-year-old student Jiang Ge in Japan seemed to finally calm down a little Wednesday after the long-awaited verdict and sentence finally arrived.

Chen Shifeng, the murderer, also an overseas Chinese student, was sentenced to 20 years' imprisonment a year after he stabbed and killed Jiang at the doorstep of her Tokyo apartment.

On Wednesday, many Chinese media were waiting outside the court. Mainstream media in Japan also reported the verdict and sentence of the week-long trial.

The case reflected differences between Chinese and Japanese cultures in how they regard murder, the law and justice. Chinese media made detailed reports and reported in detail stabbing to death of postgraduate Jiang. By contrast, Japanese media didn’t pay much attention to the case at the beginning. They felt astounded by what they called the Chinese mainland’s “abnormal”media coverage.

Generally, any fatal accident will be covered by Japanese media. In the eyes of Japanese society, Jiang’s case is just a common criminal case, and the stabber wouldn't be sentenced to death according to its law, a Japanese journalist said. That is perhaps why the case was not as closely watched in Japan as it was in China. But for Chinese society, it was more than a case that deserved justice. The morality of people involved in the case, particularly Liu Xin -- Jiang’s roommate and Chen’s ex-girlfriend -- were also a hot topic of debate, making the case unusual in China.

Search results for the key words “overseas student” and “murder” in Japanese on Thursday morning.

According to Mainichi Shimbun, one of the major media outlets in Japan, the Chinese mainland media circus to report the trial was “abnormal." On the last trial day of December 20, a total 294 people waited outside the court to draw straws for the 35 seats in the public gallery.

It was reported that the first trial day on December 11 was streamed live outside the court through Pear Video, a Chinese digital news platform, and gained 15 millions views. Jiang Ge’s mother Jiang Qiulian, spent weeks collecting signatures on the streets of Tokyo for a petition. She collected a total of 4.5 million signatures, mainly from the Internet. 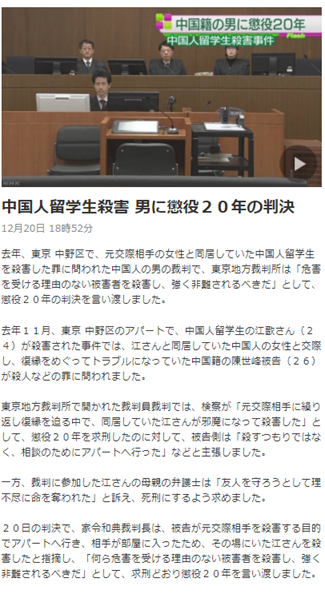 A screenshot of Japanese national broadcaster HNK’s report on the Jiang Ge's case.

Thousands of signatures were collected demanding the death penalty as Chinese mainland society paid close attention to the case, Sankei Shimbun reported on its website.

The chief judge delayed announcement of the sentencing to the very last minute seeking to avoid chaos in court.