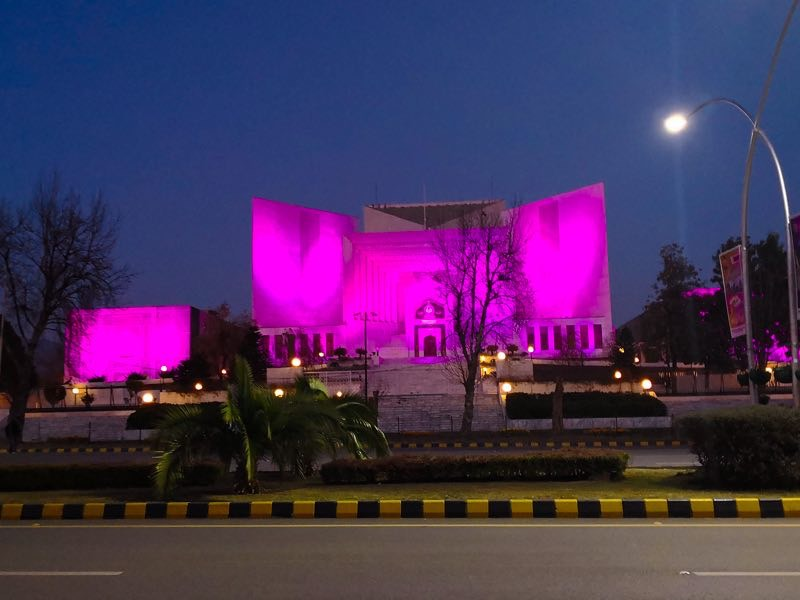 The gesture marks the first time in history for Pakistan’s law-making building to illuminate itself for a cause, a diseasethe affects millions of Pakistani women.

The move was aimed at supporting “Pink Ribbon” Pakistan, and to raise cancer awareness and stand in solidarity with survivors, especially those who have lived through breastcancer as its prevalence is the maximum amongst all the cancers in the country at 38.5 percent.

The Supreme Court is Pakistan’s highest appellate court, and final decision-making body of the law and the constitution.

“It is indeed an honor for us to illuminate the highest court of appeals in Pakistan for such a noble cause. This is a very significant and historical moment in the fight against breast cancer in Pakistan. Involvement of such a sanctified institution has provided hope to thousands of breast cancer patients in Pakistan,” said CEO Pink Ribbon Omer Aftab.

Aftab noted that as per the new statistics, almost 10.2 million Pakistani women are at high risk of getting breast cancer in their lifetime.

“We need to re-establish our health structure based on better-researchedstatistics of disease burden. Besides this, a special focused awareness drive is required to promote the concept of prevention is better than cure,” he said.

On Saturday, a seminar was held on the eve of World Cancer Day at Shifa International Hospital in Islamabad.

Pakistan is the seventh populous country with an estimated annual cancer rate of 148,041 new cases.  The number of cancer-related deaths over the last five years was 101,113, said consultant radiation oncologist Dr. Mohammad Farrukh.

Dawn News reported that cancer is the second leading cause of death at 12.6 percent after cardiovascular diseases at 15.1 percent.